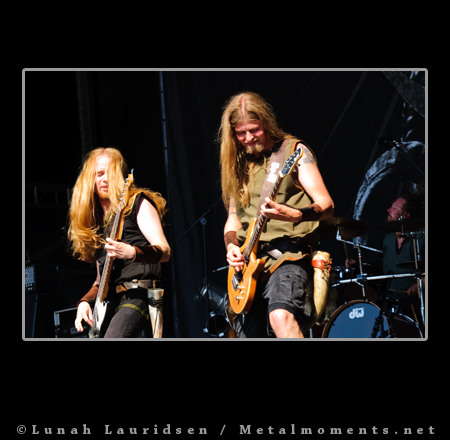 Heidevolk from the Netherlands were playing early on the last day of Metalcamp, and as I had vague memory of liking (very much even) them at a gig in Copenhagen, in combination with not having anything better to do, I felt it would be a good idea to start of my musical journey this day in the company of these Dutch pagans.

This was the warcry of the band, who quickly followed their own comment up with; ”Have another sip of beer, and we’ll try this again” as the loud and rowdy shouts of the crowd obviously was not enough to slake their thirst for a big ol’ sing-along party. But we were certainly doing all that we could!
Especially Saksenland pulled a loud oh-oh-oh humming/singing out of the audience, but this wasn’t the only one to do so…

“I have such a respect for you standing out in the sun, it’s bloody hot! If I suddenly faint, you’ll know why…”
- Bockting (vocals)

Well, sweat was running down the face of Bockting like the river Rhine flows through his homeland, but thankfully he managed to stay upright all the way to the end of the show.
The story might have looked a little differently for the crowd however, had it not been for the local Firebrigade, who pulled out their hose and dispatched a generous amount of water over everyone watching the show. This in turn only resulted in elevating everyone’s spirits even more however, or so it would seem, as the ground immediately in front of the stage turned into a large, muddy playground. And no, there weren’t terribly many to witness this show, but I can assure you that those who had shown up were thoroughly entertained!
The entire band was bringing its A game at least, and was as good between songs as they were during, resulting in a powerblow of a show, landing right in our midsection and knocking the wind out of us.

Well, it wouldn’t do without a Dutch band commenting on the ongoing football world championship, which they were doing so well in, and judging from the response the comment extracted, it would seem that a large section of the crowd were also from this northern country, or at least had their money put on their team...
As I myself am not a big sports-fan, I let this one slip by without further thought, but the rest of the show raised my expectations for the rest of the day considerably.