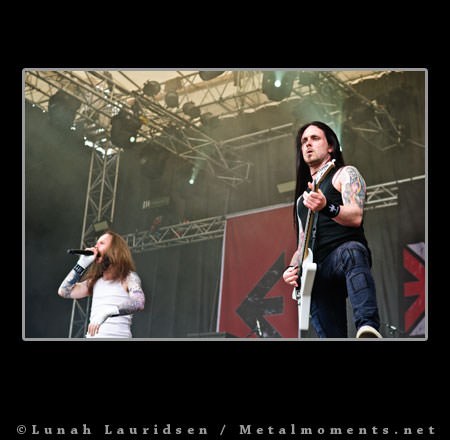 Engel has come across as a consistent and reliable source for entertainment of the heavier kind the times we have seen them so far, and thus it seemed like the perfect band to begin with on day two of Rockharz.
However, the tone wouldn’t stay as friendly from frontman Klavborn for the whole show, he demanded something in return for the bands efforts…

“Anyone who stands still is the enemy!”
- Klavborn (vocals)

This pretty much summed up what the band was all about – this was going to be speedy, energetic and ass-kicking! Or as I’m sure the band-members would say; “Just another day at the office, dear.” If they were to say something that silly, that is. They’re from Gothenburg, so it could happen.
Anyway, the band certainly didn’t indicate that they were affected by the aforementioned, self-induced affliction, as they were working hard to get the early-bird crowd off their asses and into the action. In short, they were trying hard to connect with the audience.
Engel wasn’t exactly reinventing a cup of tea here, but what they had to work with – foot on the monitor, headbanging, movement – was put to good use, and they managed to deliver a good show straight from the beginning, even though I will admit I have seen them stronger in the past

“This is a metal show, we’re not playing fucking bingo here!”
- Klavborn (vocals)

Little by little the crowd became involved in what was going on, and especially after Klavborn announced that the band was recording the video for their song Frontline here (as well as many other places, as apparent by the video which was released on Sep. 3) people announced by applause and shouts that they wanted o play along.
To accentuate this, the band was given a large circle-pit after asking for some moshing for the song Six Feet Deep, and this sort of action continued throughout the gig now when the audience was warmed up. Heck, there was even some time for a good old sing-along in Sense The Fire.
You know, this wasn’t the only sing-along the band offered up this day, there was another one, a very special one. It was the Happy Birthday song, and the man it was dedicated to was drummer Jimmy Olausson’s father, whom the band had kidnapped and forced to be the driver for their tour. An elderly gentleman peeked out with a rather shy expression (guess he wasn’t used to such a large crowd singing just for him) form behind the rack of speakers on the stage.
A funny note about them; they were Engl speakers!

After the show was done, took a proper bow in thanks of the audience, and sent picks, sticks and water bottles flying for people to bring home as mementos of the show.
For me, Engel had provided exactly what I wanted and expected from them – another solid and entertaining show. One could possibly have hoped for a little more effort, but there really isn’t anything I can point my finger to or call wrong with the concert, and I really don’t want to sound like I’m complaining as there was no reason for that. It was very good, but not the best I’ve seen from this band.