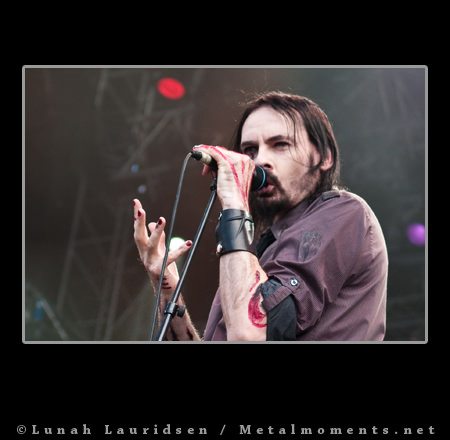 I was really surprised to see how few people were up to see My Dying Bride play. I know this day held fewer folk than the day before had done, but this was unbelievable! I could have arrived halfway through the set, and still secured a decent frontline position.

As luck would have it, I got there before the show started, and was thus in time for Aaron Stainthorpe’s well-put opening remark;”You have a lovely, sunny day here today, but we’re here to change that.”
Although nothing more than a few, white clouds made an appearance through the show, this still helped set the tone of the performance; a bleak and depressing hour, well underlined by Stainthorpe’s anxiety inducing tortured soul performance. Whilst not clambering for something safe and real (here in the form of the mic-stand), he would fall shaking to the ground; a theatrical performance well befitting the slow music in which no hope was to be found.

I believe it was just this slowness which might have hampered a more successful performance from the Brits side. After all, the sun was shining hot down upon us, it was a joyous festival and there were intoxicating beverages in plenitude. I believe people were wishing for a party, and My Dying Bride’s gloomy mood came in too stark a contrast with that need.
The crowd offered no wild reaction to the music at any time, but then again, it never called for it either. One of the highlights of the show was Turn Loose The Swans, the title-track of their second album.

My Dying Bride have in recent years been plagued by several line-up changes, where Shaun Macgowan (keyboards / violin) marks the latest, as he replaced Katie Stone less than a month before the show.
To the bands credit, it was impossible to see any problems caused by this at the concert; still, my lack of knowledge about their material, and their complete clash with their surrounding elements made this one of the festivals weaker points for me.

All My Dying Bride reviews: