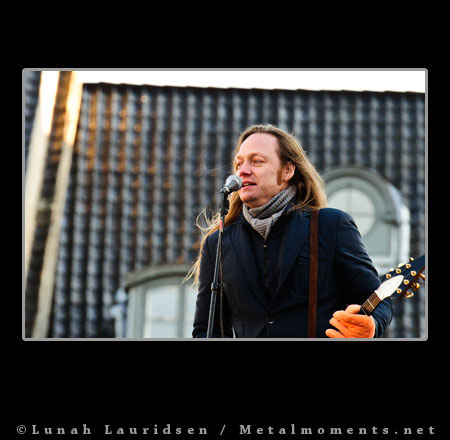 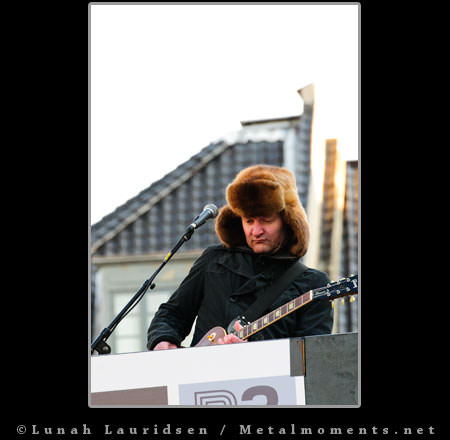 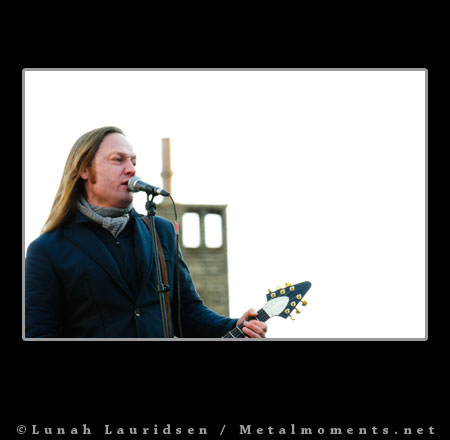 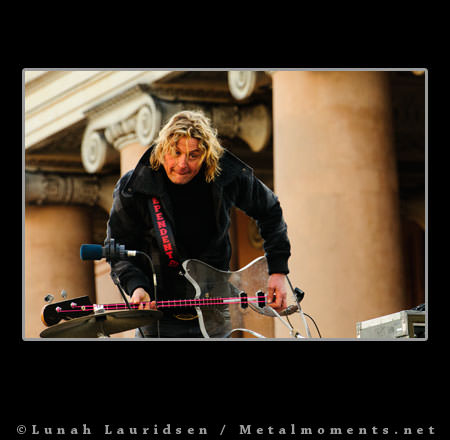 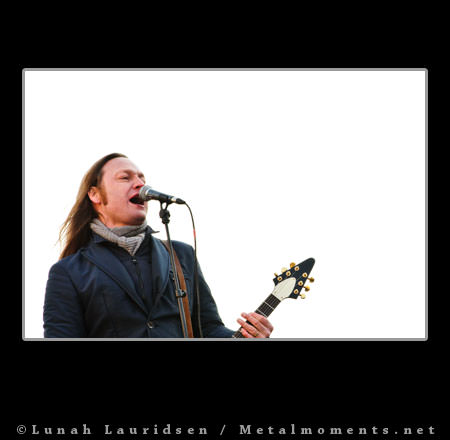 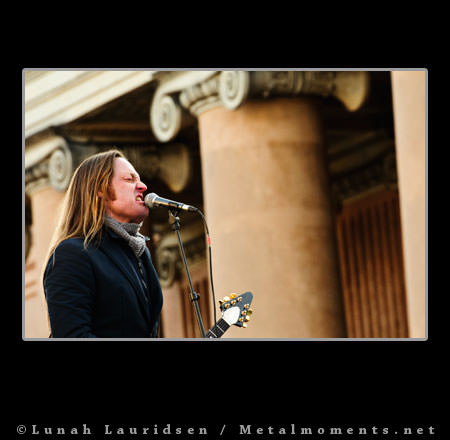 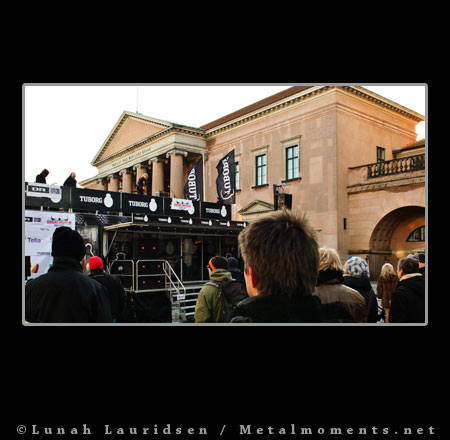 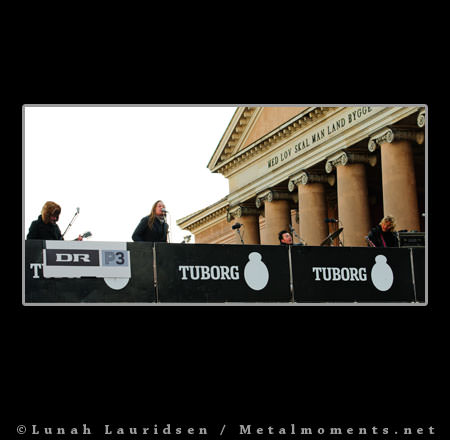 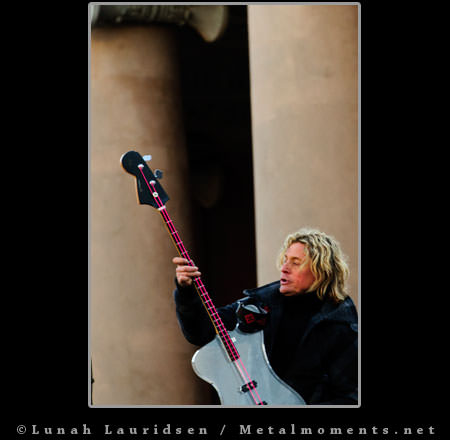 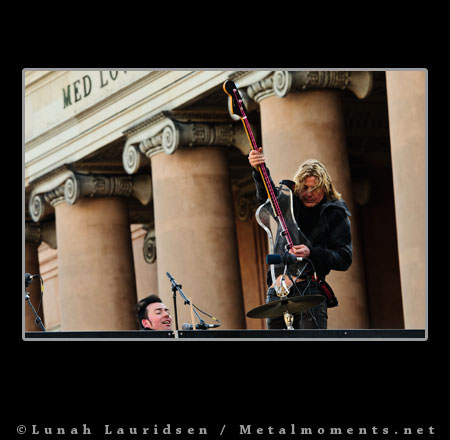 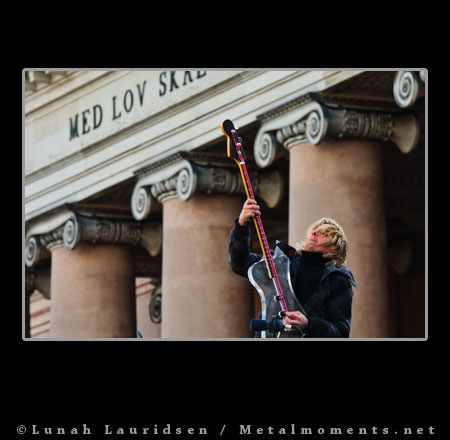 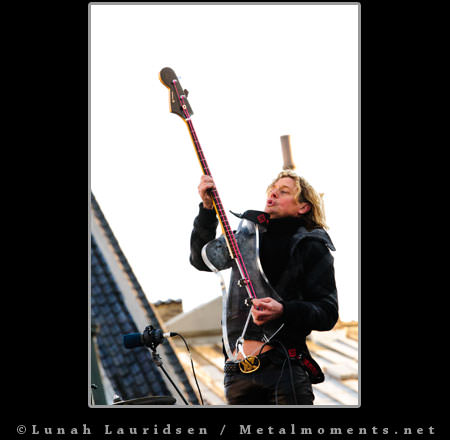 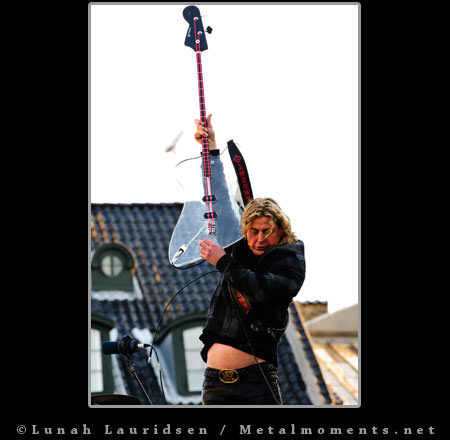 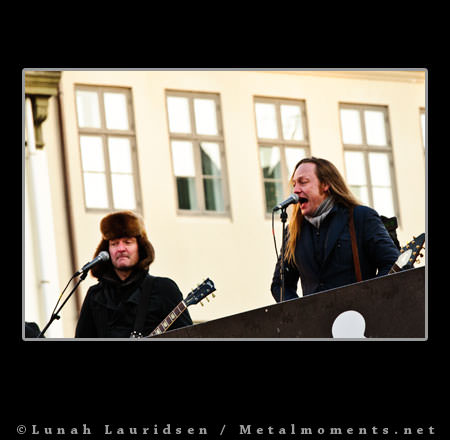 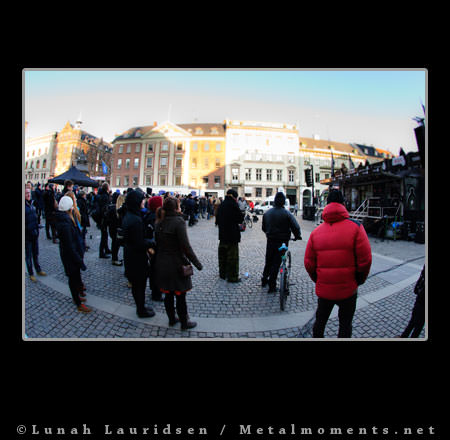 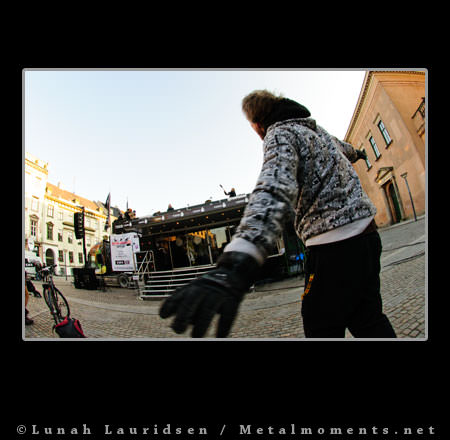 To show their support for a fund-raising event for Africa, D-A-D had agreed to do a special show in Copenhagen.

What was so special about it was that it was played outside on Nytorv, one of the many town-squares in Copenhagen, and it was played on the top of a truck! The month was February, it was freakishly cold and windy even though the day was clear and sunny. The concert was free of charge (although you were of course more than welcome to place an amount of money of your own choice in the collecting box one of the aid-workers were walking around with), and even though it was only 3 p.m. on a normal Friday, a nice collection of people had gathered to see the short concert, well-clad for the circumstances and bringing their own beverages.

The boys of the band were in a good mood as always, even though they were also clearly suffering from the blistering cold; it can’t have been fun standing up there on their elevated position what with the wind and all. Not that they really let on though; only their thick clothing and the somewhat lacking performance gave it away. Actually, it was only bassist Stig Pedersen who was displaying some of his trademark playfulness, even though even this was seriously toned down compared to what I have seen him doing in the past. Fair enough, Jesper Binzer came with the plausible explanation that the steel strings were kindly leading all of the cold directly into their fingers; maybe this was the reason for the choice of not playing their most advanced songs as well. Three tracks off of their latest album, DIC.NII.LAN.DAFT.ERD.ARK, and Bad Craziness as a closer showed that simple riffing was the game of the day, and it worked alright with the crowd.
Most of us were mostly standing quite still, our frozen fingers gripping our even colder beer whilst we nodded our heads along to the beat with big smiles on our faces, but I saw a few who dared a little dance or throwing of their thick winter jacket to have a photo taken of them in their nicest D-A-D shirt with the band playing in the background (the jacket quickly came on again after the shot though). Applause and shouts between songs proved to the band that we were enjoying ourselves though, and it seemed to be much appreciated by them.

An involuntarily humoristic event happened between the second and third song, where one of the radio guys who stood for the event came up to Jesper to have a quick word with him for the sake of the event.
Apart from the predictable great to have you here and hope you’re enjoying yourselves, he also asked if it wasn’t a bit vain of the band to be playing without hats or gloves in this weather. This was fun for two reasons; one was that just behind the radio guys back, Jacob ’Cobber’ Binzer was wearing one of those big, Russian fur hats, one which he had on through the entire gig. Secondly, and the even more obvious one, Jesper replied to him; ”Well, I don’t think it is vanity which makes us play guitar without gloves on...”
This, as well as his reply to the hat issue where he said it would mess any good hair day, gave a good response in the form of laughter from the crowd. What the radio guy thought about his own question I can’t say, but he left shortly after so that the band could continue the show.

There are of course many songs I would have liked to hear as well, especially the half-acoustic bonus song Jacketless In December from the live album Psychopatico comes to mind as being particularly fitting, but I was also very happy with what been given. After all, this was only a free mini-show, and not a regular concert. I am also sure that there wasn’t one single person who left the town-square disappointed, D-A-D just have that special magic which put people in a good mood, almost no matter what they do...

All Disneyland After Dark reviews: