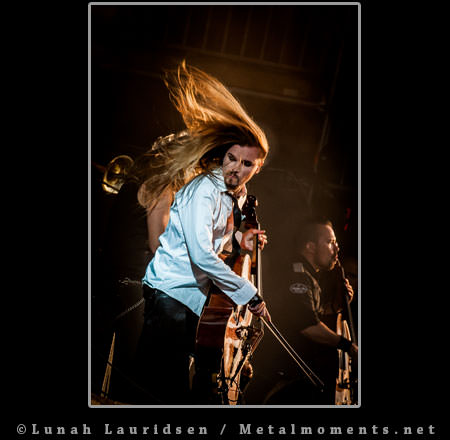 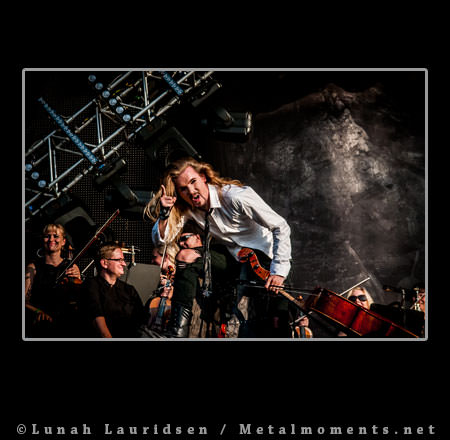 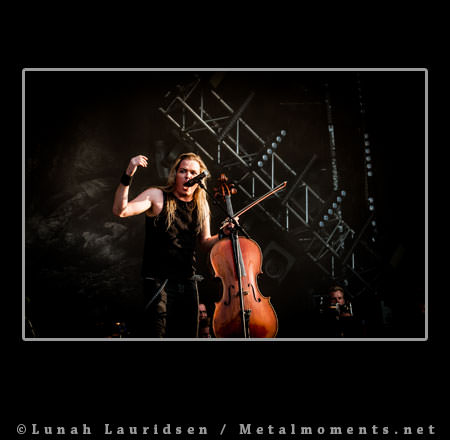 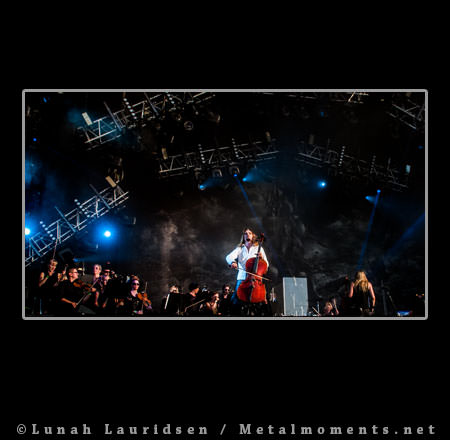 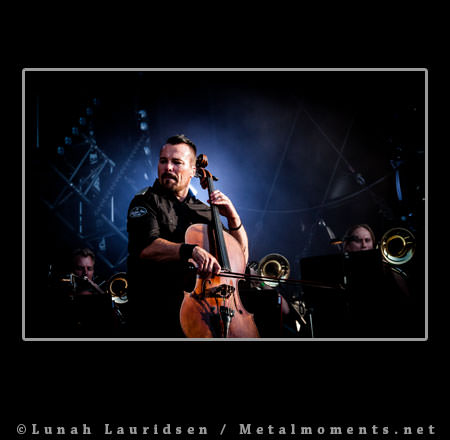 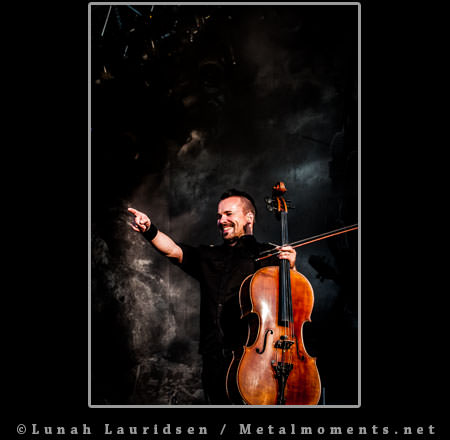 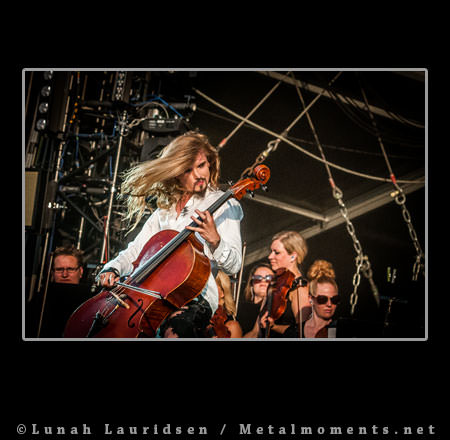 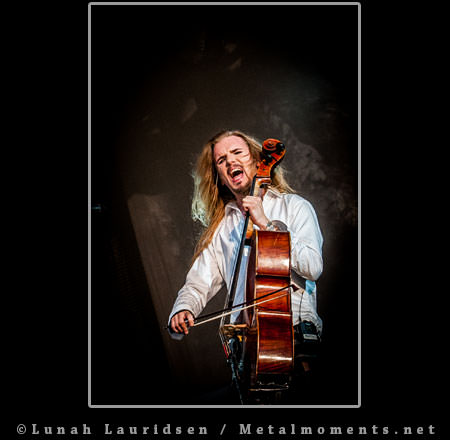 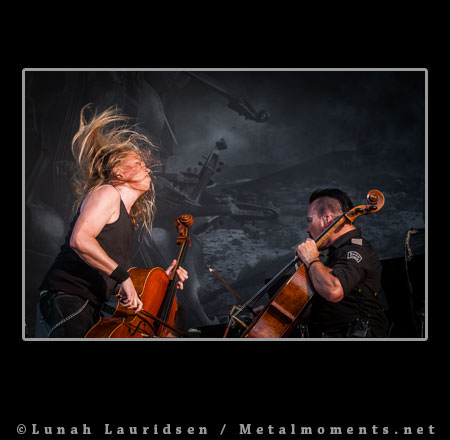 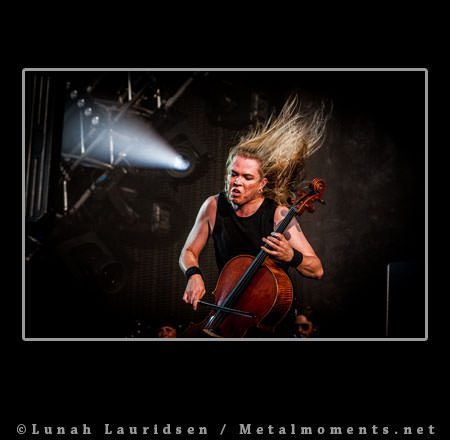 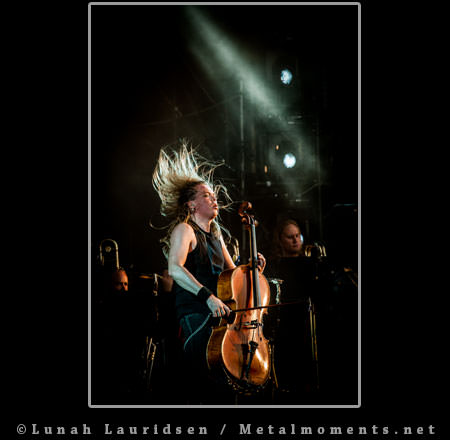 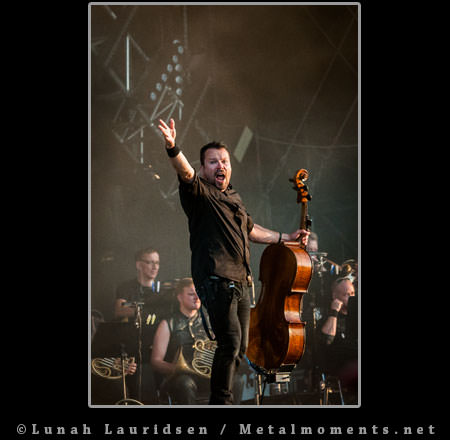 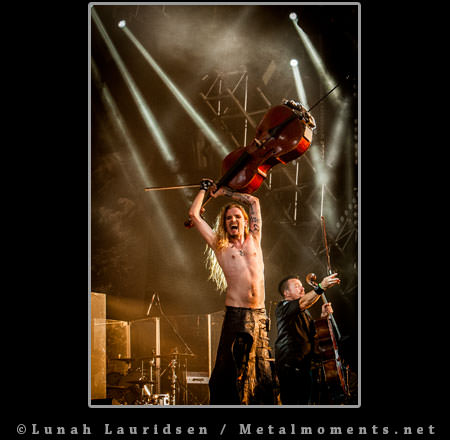 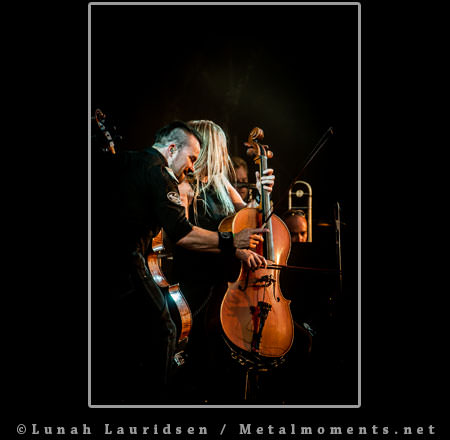 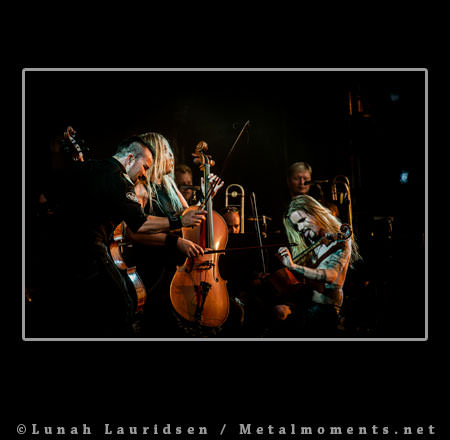 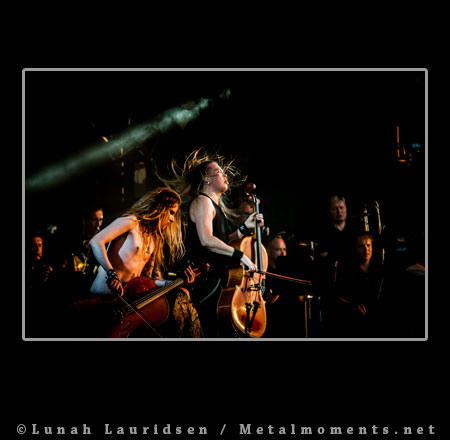 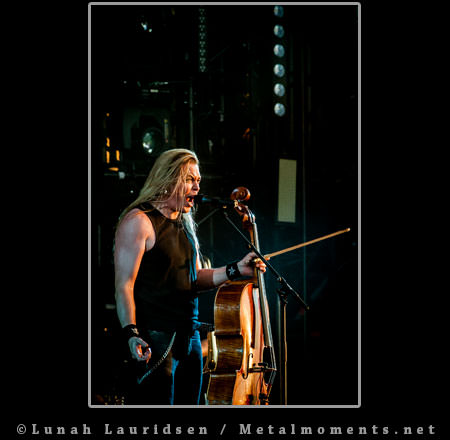 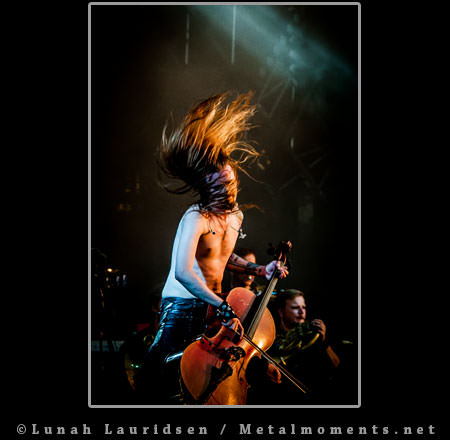 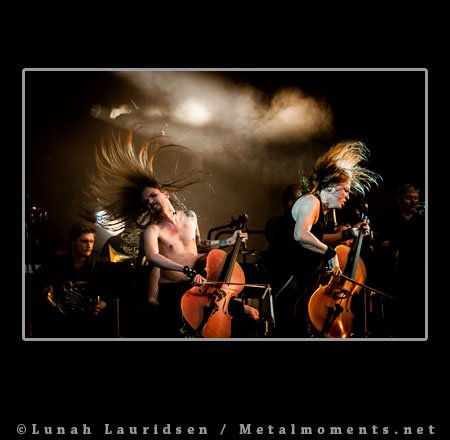 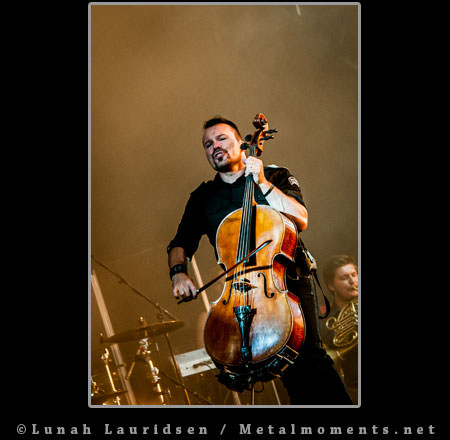 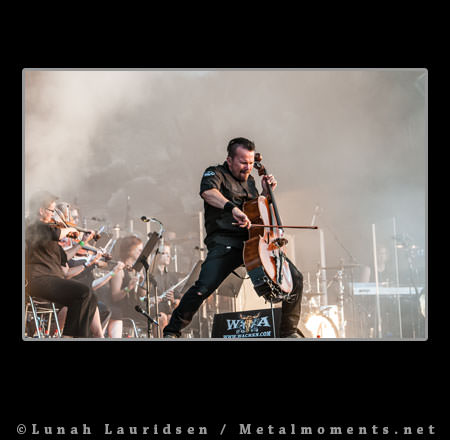 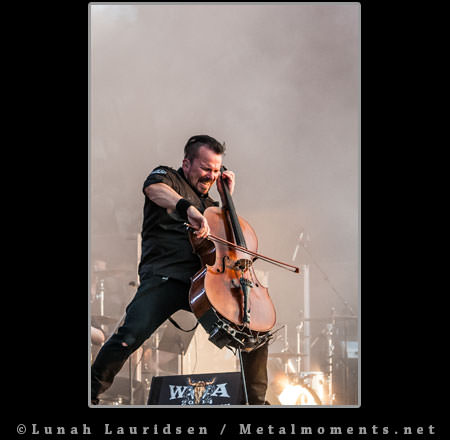 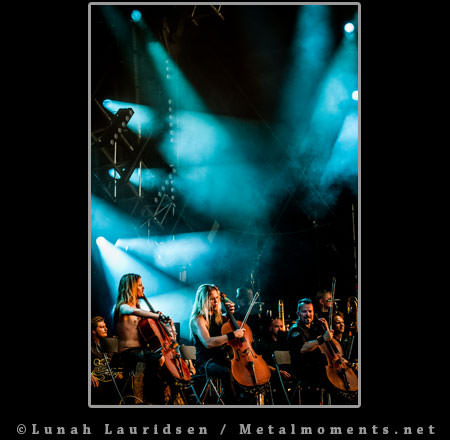 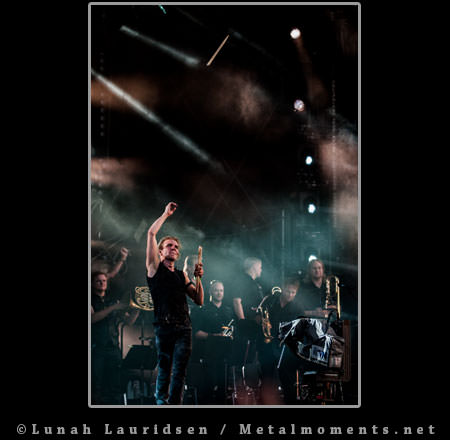 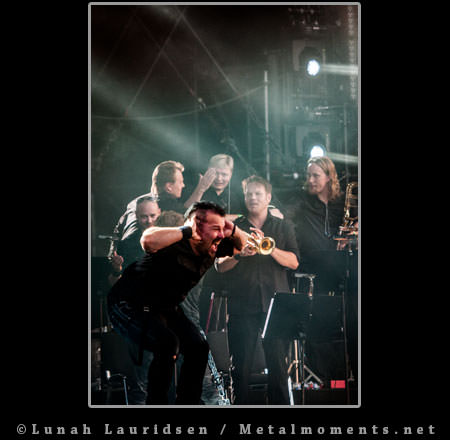 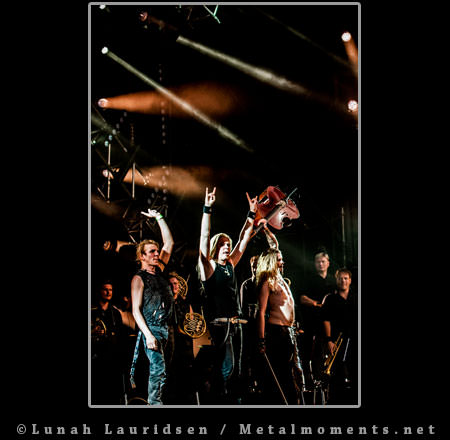 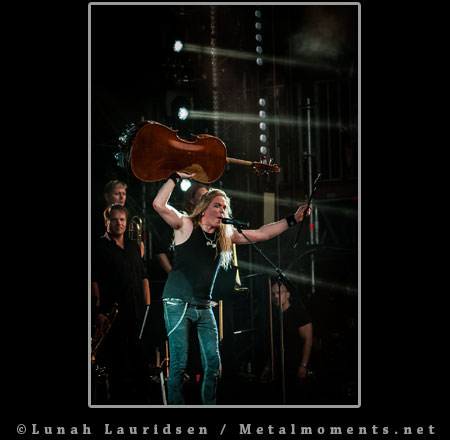 Slowly, slowly, the curtain was lowered on the True Metal Stage, revealing little by little the Apocalyptic Orchestra...

The Apocalyptic Orchestra, what is that you ask?
Well, you know the trend Wacken has with bringing special acts to their stages? This time the turn had come to Apocalyptica, the Finnish quartet that made themselves famous by playing Metallica solely by cellos. Well, the band is now more than 20 years old, and it was time for something new.
This new thing was that Apocalyptica was now going to be backed by an entire orchestra, an orchestra given the fitting name The Apocalyptic Orchestra.

Back at the show, the wind section laid the foundation by putting down some heavy brass bass, a foundation that the violins then built upon to create a very special atmosphere. It actually took me some time to realize that what they were playing was in fact a special version of Ennio Morricone’s modern classic Ecstasy Of Gold, but when I did I couldn’t think of a better way to open the show – Ecstasy Of Gold has after all been Metallica’s opener of choice for a good many years, and even though Apocalyptica has moved far beyond the realm of a mere cover band, it was still a very nice way to remember their roots.

“Wacken, how have you guys been? Let’s have some fun tonight!”
- Eicca Toppinen (cello)

The four members of Apocalyptica went on stage at the end of Ecstasy Of Gold, to loud cheers of course, and joined in on the final moments of that song before steering the course for their own material. While I haven’t been keeping up with the bands releases lately, and hence couldn’t name every composition they played, I was still very much able to enjoy each and every note that slid from their cellos and out through the speakers. The addition of the orchestra lent some much appreciated weight and flavour to the music, not because it needed it but it showed off the amazing writing skills of the band as they renewed and expanded on their material.
I was a bit disappointed in the fact that the orchestra often made use of a regular electric bass instead of a contra-bass, which would have fit much better with the style. I have never gotten used to the fact that they began to employ drums in the band, and I don’t intend to do so in the future, and this bass was striking me in all the same wrong spots as the percussion was.
It was sadly all too apparent that Wacken’s gear wasn’t rigged for this sort of musical depth either, and on too many occasions the bass section drowned out much of the rest of the instruments, which certainly was sad considering the huge amount of talent that inhabited the stage at this moment.

As experience teaches us, sound is only part of the enjoyment though, and performance is easily as important, if not more, and if there is something Apocalyptica still know how to do, it is to perform – the three men in front, Toppinen, Paavo Lötjönen, and Perttu Kivilaakso, were full of energy and always on the move, headbanging here and jumping there. Kivilaakso was possibly the most audience minded, and took places with Toppinen from time to time in speaking between songs, at the band presentation for instance, whereas Lötjönen was more mobile than I remember seeing him in the past. Heck, he even turned a cartwheel at one point!
The audience was greedily taking it all in and asked for seconds. Not that there wasn’t enough to go around, but I honestly think everyone that visited Wacken this year also visited Apocalyptica this year – when I stood on my toes to look around me, I could see a sea of heads stretching well beyond the entry gates for the festival area! I don’t know how much of the show one could actually see from all the way back there, but no one was going to leave apparently.

Although Apocalyptica hardly is a moshpit inviting band, most of the time at least, there was no lack of audience participation in the fun – oftentimes headbanging was going on around the place, and there was a near goose bump inducing spontaneous sing along for Nothing Else Matters.
I too sang along as best I could (I accept my limitations, and hope the people around me does the same), and quite frankly I had a great time – Apocalyptica was on top, and even though their true nature for me will always be with four cellos and four cellos alone, the off participation of an orchestra is welcome to change things up a bit.