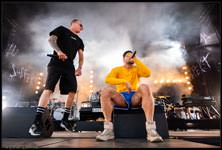 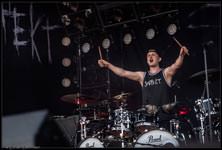 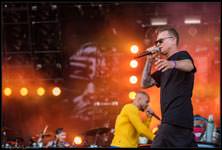 The weather was on its best behaviour and drinks had been pouring generously for several hours by now, so the audience was good and ready, and when the curtain covering the large stage fell, a tremendous cheer rose up to greet the band.
Suspekt went straight to work, opening immediately with 100% Jesus. Rune Rask could be seen sporting a Slayer shirt, winning immediate points of respect from this end. The shorts and shirt on Emil ‘Orgi-E’ Simonsen however, that's a wholly different story altogether…
Yet, we are in no way a fashion police site, so let's move on.

“This is the eighth concert, this is the last concert, and fuck we're excited about this!”
Emil ‘Orgi-E’ Simonsen (vocals)

Suspekt showed from the very start that they were going all in again, when it came to delivery and performance. There was energy flowing, a good vibe supported by their chattiness between songs, and a great connection between band and audience. The two frontmen kept themselves at the edge of the stage most of the time, and the live musicians were grooving without stealing focus - well, the guitarist was quite fun to follow as well.
When on the subject of guitarists, Jacob Binzer of D-A-D once again guested the stage for Amore Infelice, but this time he stuck around and played Danmark with them as well. Between songs he performed a little party-trick, where he balanced a pint of beer on top of his top hat. I still think it's an odd coupling, but the audience enjoyed it, and so did I.
Binzer wasn't the only one carrying beer around either, as Orgi-E, together with their own guitarist, made their way through the audience during Hæld Op (which translates to “pour it up”, fittingly) with beers for the sound and light technicians, sitting all alone in their tent opposite the stage. Hæld Op also saw a guest vocalist take the stage - Xander, who's also singing on the recorded version of the song.

“Ya'll are wearing too much clothes!”
Orgi-E (vocals)

Orgi-E wasn't one to shy away from leaving the stage at other times as well, and when he went into the security pit, or sat on the crowd fence, a large group of girls was sure to surround him immediately, screaming out their lust and ecstasy.
The rest of the crowd was happy to try and sing along, though mostly just chanting Suspekt again and again. And dancing, there was a lot of dancing going on.

While Suspekt had everything going for them, not in the least their own giant effort, they still left me slightly cold. I, for once, didn't feel invited to the party, and it failed to grab me in the same way they've done in the past.
Even with that, I wasn't surprised to see Suspekt receive the honour of being given the Respekt award again, just like they did back in 2016.