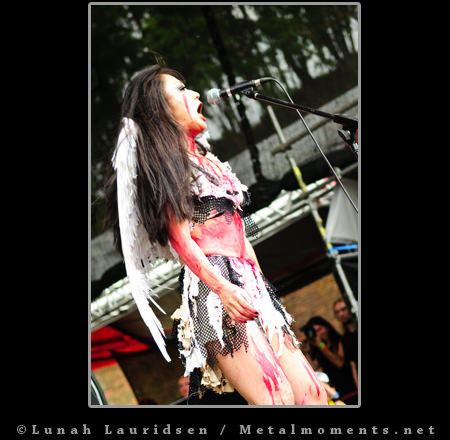 Avant-garde black metal band Sigh from Japan had come a long way to visit us here at the Brutal Assault festival in the Czech Republic, and there were quite a lot of people out to greet them on this sunny day.

The first time I heard Sigh was by sheer coincidence, as it was put on play at a local record store in Copenhagen, and I remembered the name from the Brutal Assault line-up.
I immediately found it interesting, and decided this was one of the new bands (for me) I wanted to check out this year. Fast forwarding a bit in time, and now here I was, standing in front of this quintet of evil from afar…

As is the case for most bands at this festival, Sigh didn’t have much of a stage setup to speak of. Whether this is normal for them or not, I can’t say, but I can say that it didn’t stop them from trying to bring something more than just music to the table. Already in the opening track both vocalists of the band, Mirai Kawashima and Dr. Mikannibal, were making up the lack of pyrotechnics by playing around with some fire of their own. Dr. Mikannibal had a little balloon, probably filled with some form of flammable fluid, which she used as a petit lame-thrower, and Kawashima had what looked like any ordinary lighter, but gave of a flame about half a meter high straight into the air! Later they would also set fire to a book, which was possibly made to resemble a bible, and some other antics as well.
And yes, I did say both singers; apparently Sigh has both a male and female vocalist, but don’t let this fool you into thinking this is just another ‘beauty and the beast’ setup; both Kawashima and Dr. Mikannibal were ripping their lungs out with grim vocals. So if you are into harsh female vocalists (come on, I know you’re out there) then I would certainly recommend giving Sigh a spin or two; in my opinion Dr. Mikannibal would kick Angela Gossow’s (Arch Enemy) ass any day of the week.
It was also these two who stood for putting the show into the show, so to speak. Dr. Mikannibal, dressed in her torn angel outfit and wings and covered in blood was dancing, headbanging and kicking up a storm like nobody’s business for most of the time, and she definitely looked cool headbanging with her saxophone. How often can you say you saw something like that?
Kawashima was also working the stage as he got into the music, and although he didn’t say much between songs, he seemed very happy to hear some people in the crowd yelling something I can only presume to be song-titles. He even took the time answering them, but with the sound being what it was, I’m not sure what he actually said.
The rest of the band were, although technically good, more anonymous in their performance and mostly stood their ground out to the sides and behind the drums without drawing too much attention to themselves.

The crowd on its side, seemed to enjoy the show a lot, and was making quite a ruckus.
I know that at festivals you can easily go up and see any band you want without any prior knowledge of them, but judging by the shouts around me I was surprised to see how many actually did seem to know Sigh from before. I must admit, I have idea of how big or not they are, I just found them interesting when I heard them in that shop…
Still, loud chants of Sigh were shouted at several times, and it didn’t go unnoticed by the band, which seemed to appreciate the attention very much.
However, the band had decided to give a little something to those who didn’t know them as well. As the last song for the day they played a well-known cover in the form of Black Metal by Venom. For this song Kawashima was alone on vocal duties, as Dr. Mikannibal was busy pouring melted candle-wax over herself, and breathing fire.
This last course of action had an unwanted side-effect though, as she accidentally set fire to one of the monitors. This was where Sigh showed they weren’t like the arrogant rock-stars of the west, as both vocalists looked genuinely concerned and tried to help the stagehands in setting things straight…

Because of a not so perfect sound, I wasn’t as caught by the music as I had hoped, but Sigh were still cool to watch, and it is not impossible I will return to the record shop in the near future to see if they still have an album lying around.