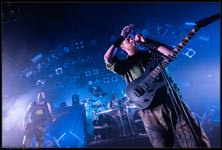 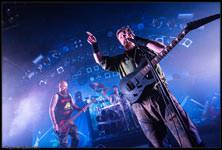 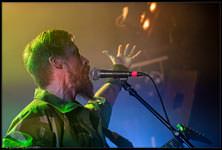 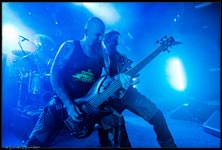 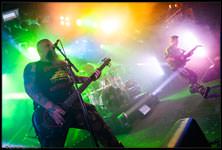 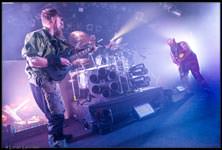 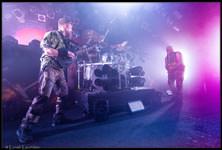 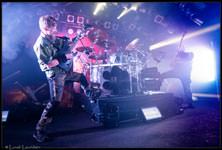 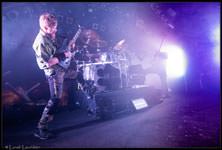 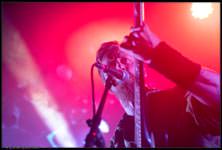 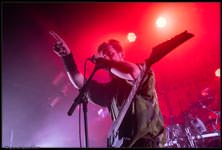 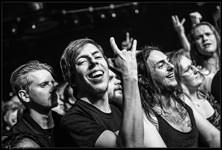 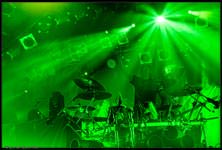 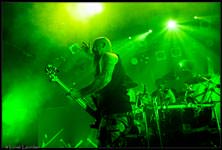 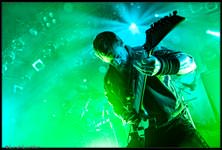 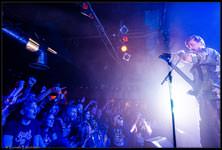 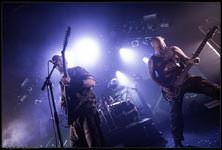 It’s been three years since last we saw Raubtier, and it was at this very venue it happened.
Now, with the new and highly praised album Överlevare (eng: Survivor) in the bag, it was time to once again face the music, as it were.

“God damn it’s nice to see that so many showed up tonight. Now we’re going to play panzer rock’n’roll until sweat is pouring out!”
- Pär Hulkoff (vocals/guitar)

Raubtier had brought Alfahanne and Utmarken with them as support, but due to a train mess-up, we didn’t reach the venue until the very end of the latter of the two - basically just in time to navigate through the sold out venue to a good spot for the main act of the evening. Not long after, the lights went down, and Nordman’s song Be Mig came on. Already the audience showed their enthusiasm through singing along, a precursory taste of what was to come again and again through the rest of the show.
But we’re getting ahead of ourselves. First the band needs to come on, and so they did. The audience was lit. The band broke into Det Finns Bara Krig, and the audience broke into a roar. It might sound like I’m exaggerating, but I tell you, there’s a reason KB was sold out tonight. And, with all due respect, it wasn’t for the support bands.

The whole magnificent trio of Raubtier, Hulkoff, Buffeln, and Kjellgren, was as lit as the audience, it would seem. They played hard and fast, and while Hulkoff took a little time to talk to the audience between songs, this was mostly about the music and the performance. So instead of splitting things up, with heavy music here, and funny comments there, Raubtier put it all into a highly successful blend. Not that anyone was talking during songs, but they were happy enough to throw poses, do tandem string wankery, and during at least a couple of occasions, Hulkoff left the stage in favour of playing in the security pit. Just to get closer to the many, many fans. There was one piece of even more blatant, but genuinely delivered, fan service, as Hulkoff slightly changed the lyrics of the hit song Världsherravälde to say “hur Malmö sjunger” instead of “hur vildmarken sjunger”.

“If this was my bunker, this would have never happened.”
- Hulkoff (vocals/guitar)

At several points, Hulkoff didn’t have the chance to change the lyrics though, as he left all the singing to the crowd, something they were more than capable of handling.
It even got so intense at one point, that the power blew out on us. Lights were still functioning, but there was no sound at all coming from the stage. While it was going on, there was nothing more to do than shrug and smile about it. This didn’t slow the party down however, and from the already excited audience, the name of “Hulkoff” was chanted over and over, putting a big ole’ smile on the frontman’s face.
It was also so intense, that the guards were handing out free water at the front - this is something I don’t ever remember seeing at this venue before, so that should give you some indication of the heat and pressure level we were facing.

Raubtier played for a good, long time, and had an impressive amount of songs on the setlist. Personally, I think I’ll always miss Rebeller when it isn’t there, alongside a few other titles, but I’m not complaining about the songs we did get. There was a surprisingly low amount of new material, with only three songs from the new album, but on the other hand, the band had managed to squeeze a short drumsolo/disco hybrid in between Legoknekt and Polarvargen, which was quite fun, and I discovered a new-found affection for Bothniablod, which has never before sounded as well as this, not even on album.
So we all faced the music, audience and band alike, and we all walked away the better for it. Let’s cross our fingers it won’t be another three years before the next visit.