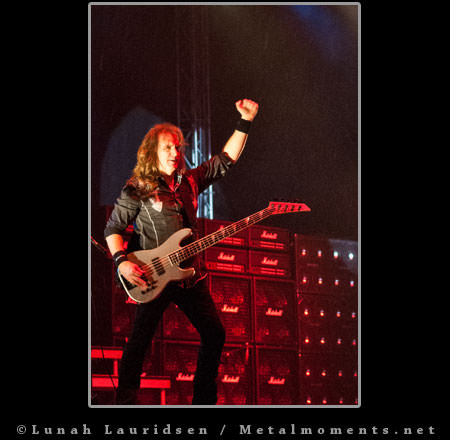 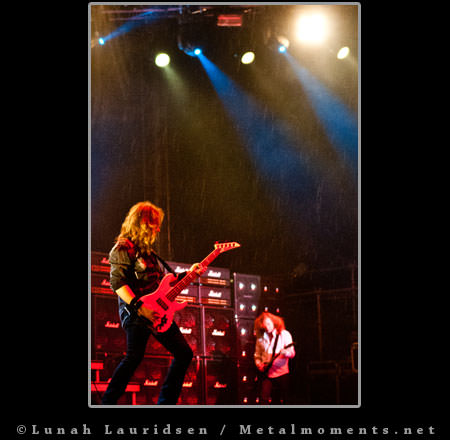 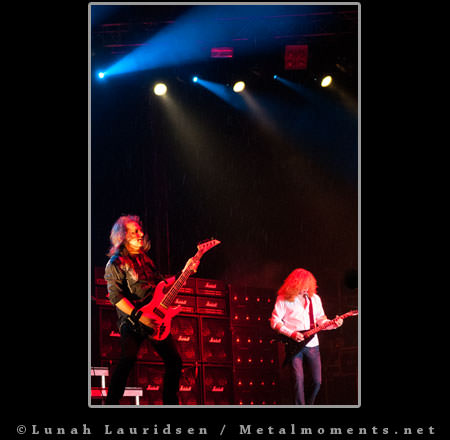 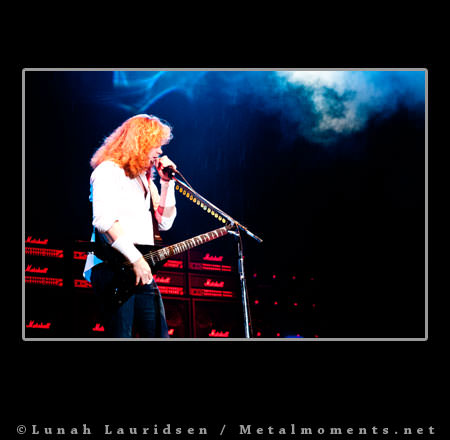 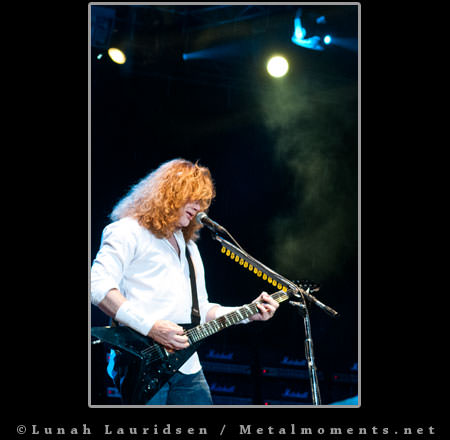 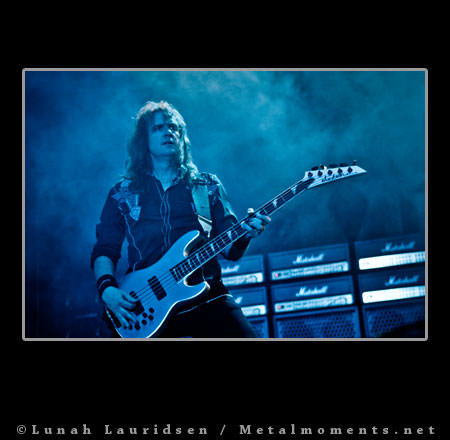 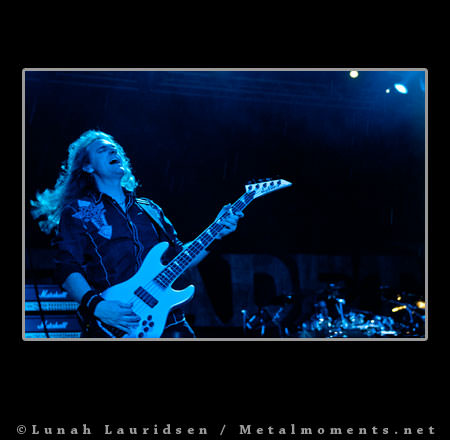 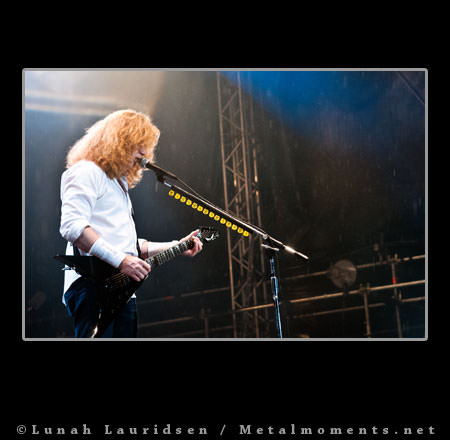 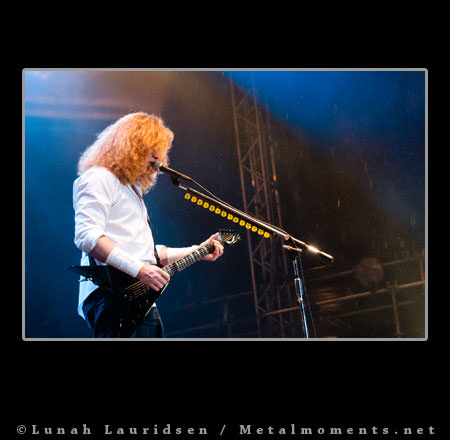 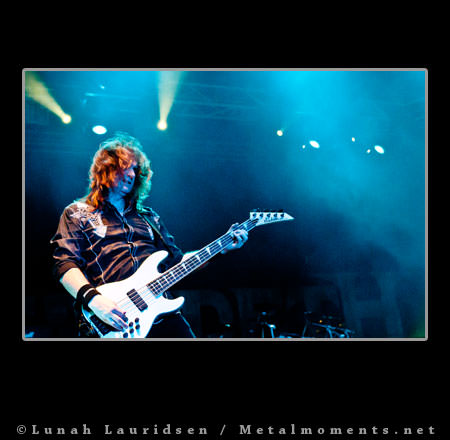 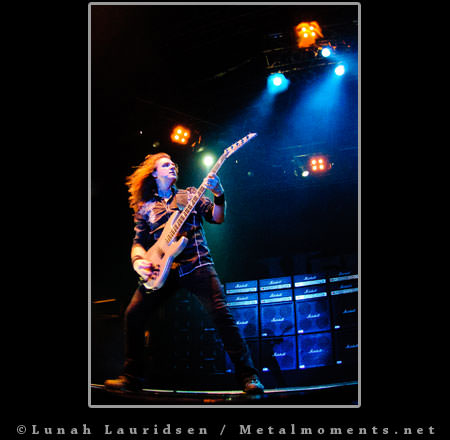 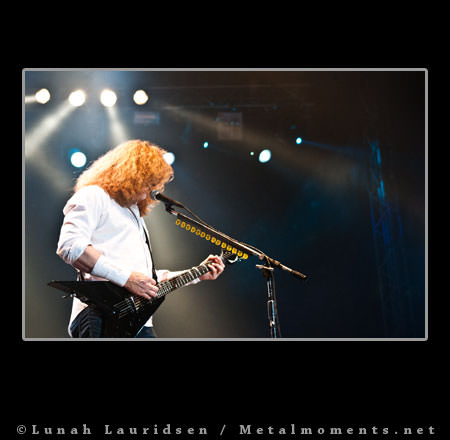 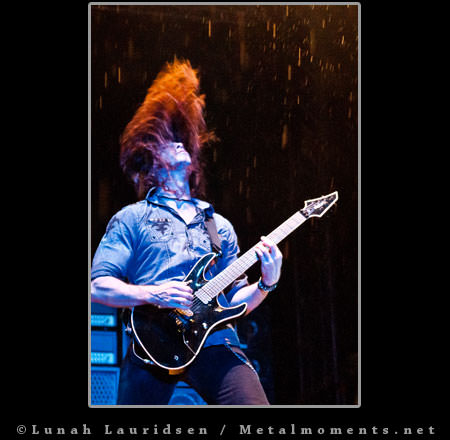 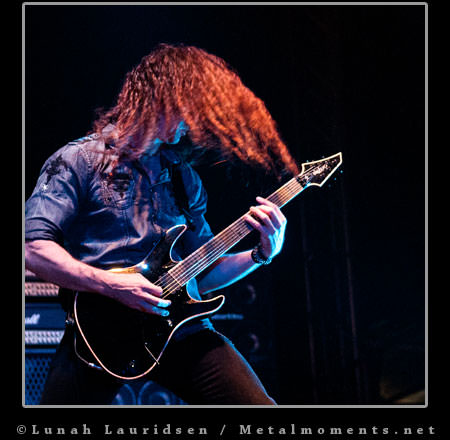 ”I woke up in California today, and when I heard it would be raining here I figured that it would either kill the show or people simply wouldn’t care. So, thanks for putting up with the shitty weather just to listen to some music!”
- Dave Mustaine (vocals/guitar)

Megadeth was the headliner on the first day of Metalfest, and as the dear frontman hinted at, the weather was literally pissing down our backs at this time. Still, there was a big crowd out to see what these thrash icons had to offer.
I might as well jump straight to it and say that, sadly, it wasn’t much. Mustaine just stood there by the microphone with his head hanging so that it was completely engulfed by his red hair, and David Ellefson and Chris Broderick didn’t fair that much better. A bit of walking around was all they seemed to muster; whether it was from travelling fatigue or something different I cannot say, but I can say that this was simply not enough. Not enough for any old band in general, and particularly not enough for a headliner of this calibre!

The result of this was easy enough to see in the German audience, as even an old classic like Hangar 18 didn’t grab anyone’s attention. People were there, yes, and of course there were a handful or so headbanging in the front, but apart from that nothing much was going on.
One reason for this lack of interest could be that Mustaine forgot to be a frontman as well as vocalist and guitarist. The first many songs were just pumped out in fast succession, leaving no room for interacting with the audience – heck, it didn’t even leave any room for connecting with the songs played it would appear!
This issue was luckily worked on a while into the set, where Mustaine both addressed us in comments and applauded our will to see the show, something that clearly helped him and his band gain land with the crowd which opened up right back at him.

Sadly though, another thing missing was the trademark aggression, something which was especially noticeable in Sweating Bullets, where the original murderous snarl of Mustaine’s voice was watered down to a more family-friendly hoarseness which completely took the edge of the song.
Again, things improved over time, and when we were closing in on the time where the encore was close to the only thing left, it had even gone to acceptable with a small plus sign after.
Response in the form of shouts and applause were steadily rising though, and more and more people moved into headbanging position as well which was good to see.
After closing with Holy Wars… The Punishment Due, the entire band even gathered out on the catwalk to take a final bow in good style.

The problem with the show could easily be summed up in the expression “too little, too late”; even though Megadeth ended on a fairly good note, it was not enough to save this show from being down right boring…