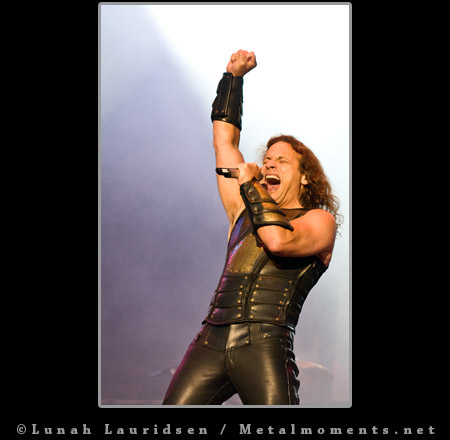 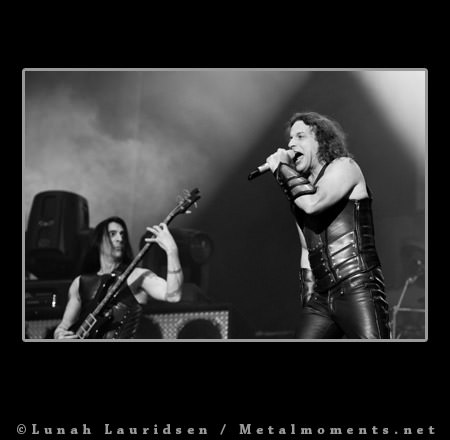 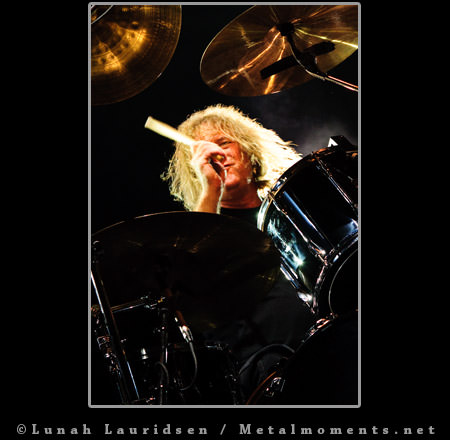 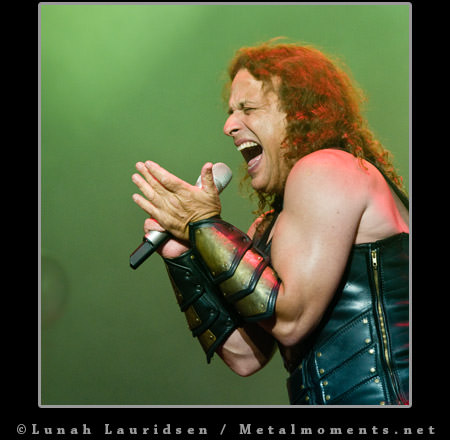 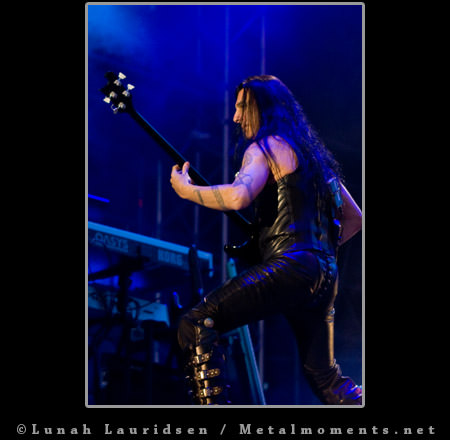 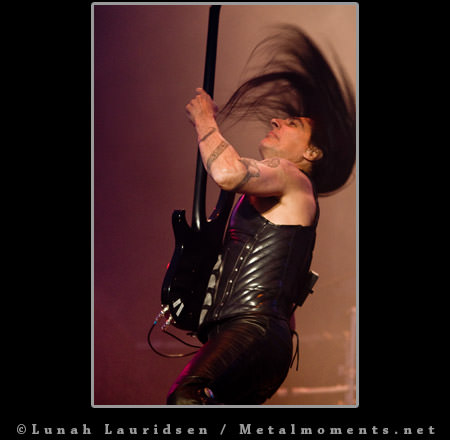 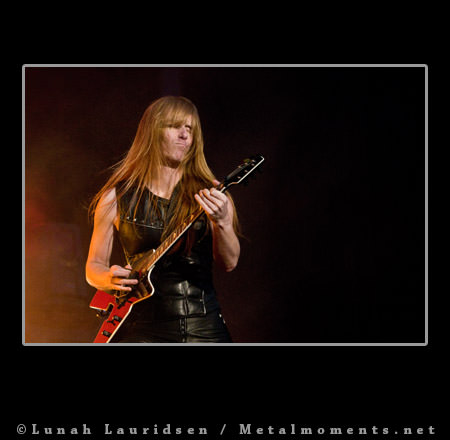 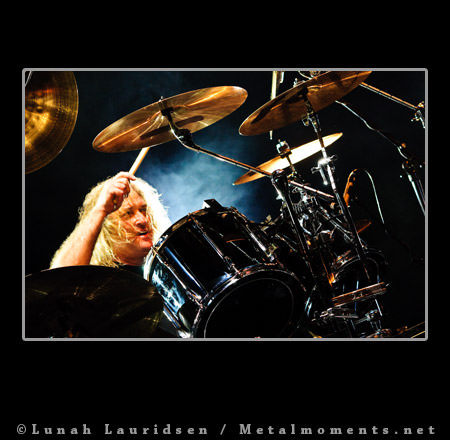 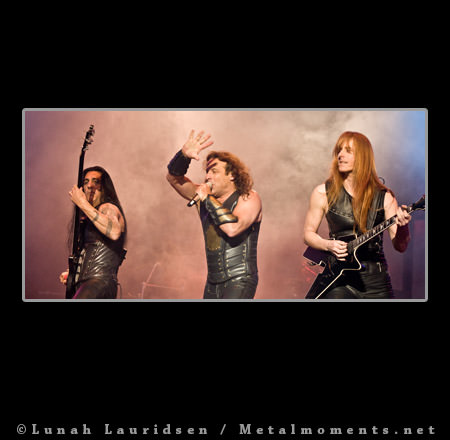 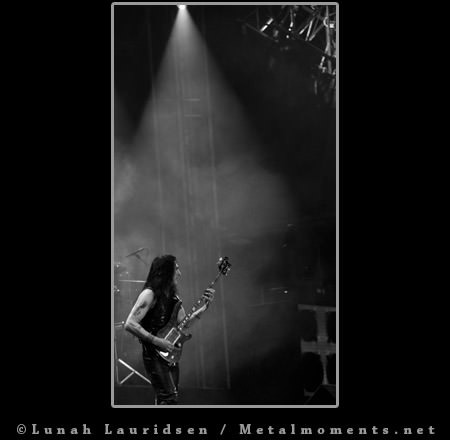 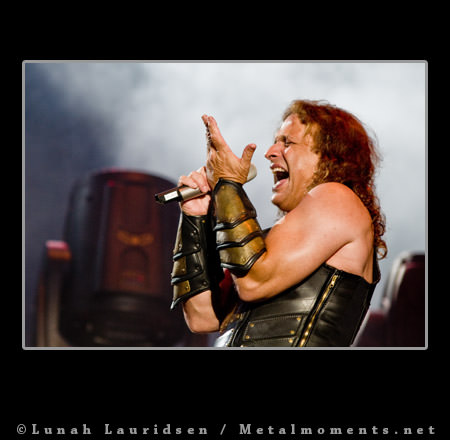 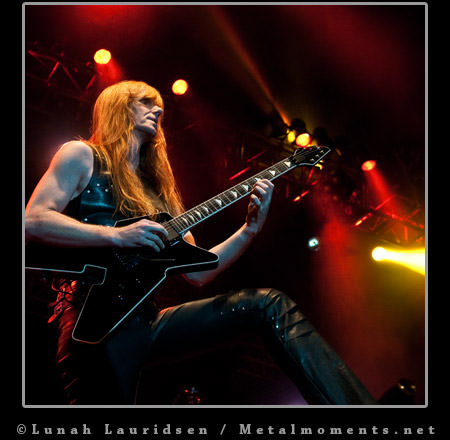 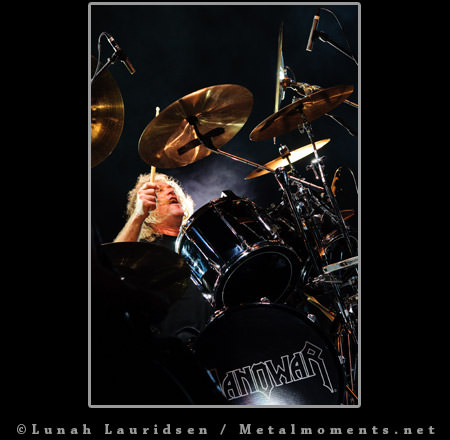 Note: Due to restrictions from Manowar’s management, no photographers were allowed on the Lords of Steel World Tour. Hence, the photos you see here are photos taken from Lunah Lauridsen’s archives from 2008 and 2010.

As the Kings of Metal were ready to take on Copenhagen as the first city of the second leg of their Lords of Steel tour, Metalmoments was of course obliged to be there and report of the drunken chaos that would surely follow. Much at our own hand, I might add.
So, off we went to a sold out Vega where the battle was set to take place.
When we entered the larger of the two concert halls at Vega, the place was getting more packed by the minute, and the bar-maids had a busy time taking everyone’s order before the show would commence – you can’t be at a Manowar concert without a beer in your hand, that’s some form of law of nature or something!
However, the sold out announcement soon proved to have been a bit of an exaggeration, as the balcony that stretched all around the room had been closed off for visitors – apparently no one should be above Manowar or something like that. Good old Manowar, it’s never too late to add a new chapter to your megalomania!

Anyway, after spending some time drinking and standing around (did I mention there was no support band, except for the beautiful song effort of our good friend Steen of Revelationz Magazine) and also wondering why it was such a big deal to cover the bass drums with a cloth as the only thing on them was a pair of silver Manowar logo’s, the lights finally went down, and a familiar voice announced;
“Ladies and gentlemen, from the United States of America, all hail Manowar”
Well, after this you all know what happened – the band spilled out on the stage, firing the self-titled eternal opener left and right, making men roar and women swoon. Well, at least we would have if the damn bass hadn’t been so loud it nearly knocked us off our feet with every beat of the drum!
Not that it mattered much though, crappy sound or not, this was Manowar just the way they are supposed to be – larger than life and loving it!
The set stayed on the classics for a while, before changing things up with a few tracks from the band’s latest magic circle, The Lord Of Steel, and a few solo’s scattered around the place, the most audience gripping of which was certainly Eric Adam’s shouting competition. Joey DeMaio’s solo was a mix of parts Sting Of The Bumblebee and parts just messing about. For some unknown reason, Karl Logan’s solo was so short it could hardly be called a solo at all, and sadly Donnie Hamzik’s drum solo didn’t register at all with me. After seeing the entire band get on stage at the Earthshaker Festival back in 2005 to play Battle Hymns together, I have maintained that Hamzik eats Scott Columbus for breakfast and shits Kenny Earl ‘Rhino’ Edwards before lunch-time, but this was downright uninspired and boring…

“That’s what’s so great about Danes, they keep on drinking even after they’re drunk!”
- Joey DeMaio (bass)

We hadn’t come for solos though, we had come because we had heard the call from high command and were ready to make a stand.
Ok, stand is too much to be said, given the extraordinary moshpit that was tearing the floor up! Fair’s fair, the new songs didn’t go down as well as the old classics, but isn’t that always the case with every band? Anyway, when we had about a quarter of the set left, or when we reached Kill With Power to be precise, the audience really let loose all of the built up power that had been gathering so far during the show, and it was quite impossible to stand still as the massive force of the large crowd tore you from side to side. It wasn’t that there hadn’t been moshing at the show earlier than this, because there had, but the intensity grew a few hundred percent when we came to the run of Kings Of Metal and Hail And Kill! The encore part with Warriors Of The World and Black Wind, Fire And Steel didn’t go down easy either, let me tell you.

But what is a Manowar concert without a DeMaio speech?
Surprising is the word that comes to mind, but we weren’t cheated from it this night; I was however happy to see that he kept it to a single one tonight, and it wasn’t overly long either. To be completely honest, it was more varied than Hamzik’s drum solo, but that’s another story…
He started out by dedicating the show to an old Danish promoter called Erik, with whom he had many good memories from back in the day, then moved over to speak an impressive amount of Danish, and did it rather well I might add, before finishing off with getting Jeppe, a promoter for Copenhell out on stage and downing a beer with him after asking the audience which band they would like to see play at the Copenhell festival (you can probably guess the answer, right?).

After 19 songs, four solos, and a grand final outro with The Crown And The Ring (Lament Of The Kings), the evening with Manowar came to an end.
The band is visibly older, the leather pants have been replaced with looser fitting army-pants as the bulging muscles inside have shrunk away, but the band can still kick ass, and are still the premium drinking band out there, there is no doubt about it.
Sadly, they have moved far, far away from their own motto of old; “all for the fans”, and Miss Manowar contests and guest guitarists have been replaced by high ticket prices and limitations on the venues, but when they pull out those classic tunes I can’t help but forget about all of this for a while and swim away in a drunken bliss of sing-along chants about damsels in need of men and enemies in need of slaying – all silliness aside, this truly was an epic night!

Manowar
Call To Arms
Sign Of The Hammer
The Power
Hail, Kill And Die
Solo (Adams)
Brothers Of Metal, Part 1
Mountains
Expendable
El Gringo
Thunder In The Sky
Solo (DeMaio)
The Sons Of Odin
Hand Of Doom
Solo (Hamzik)
Kill With Power
Kings Of Metal
Hail And Kill
Manowarriors
The Lord Of Steel
Warriors Of The World
Black Wind, Fire And Steel
The Crown And The Ring (Lament Of The Kings)