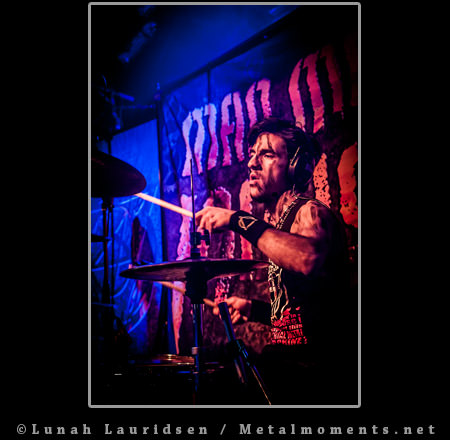 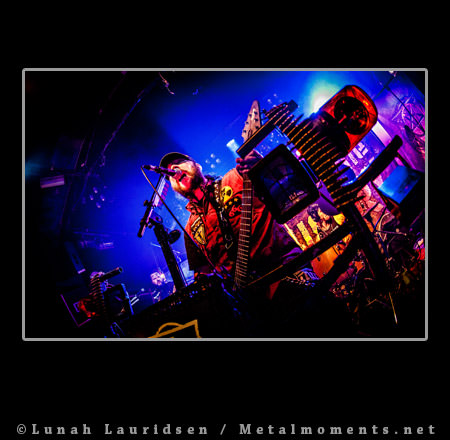 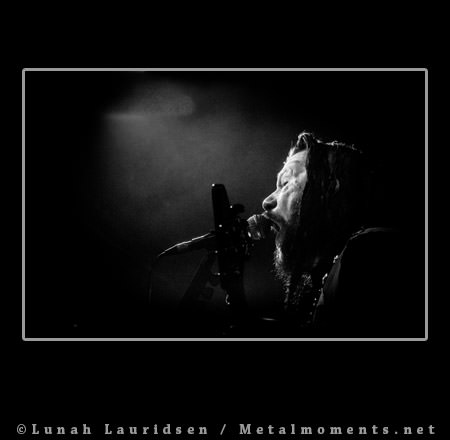 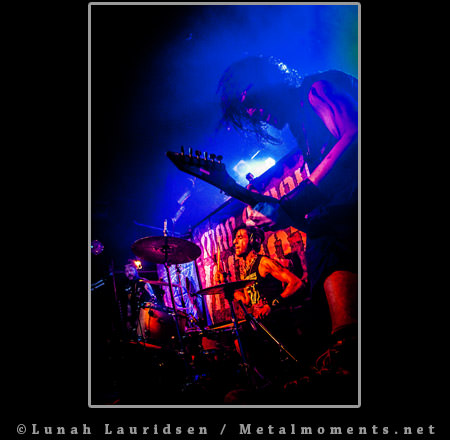 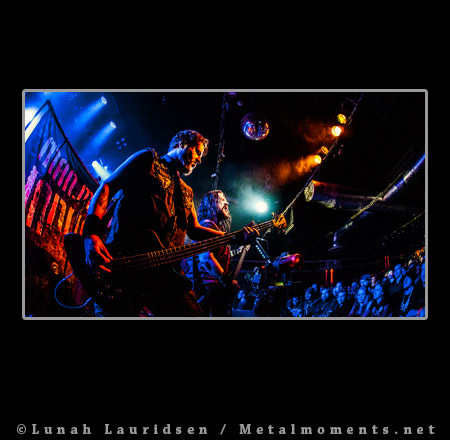 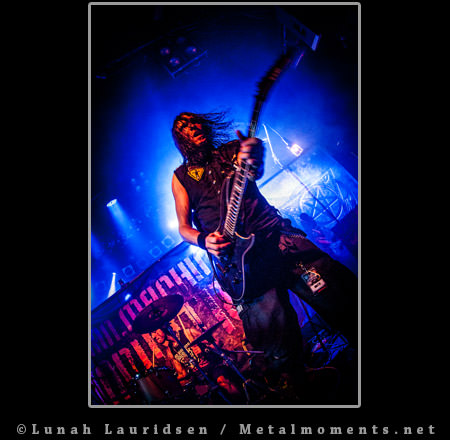 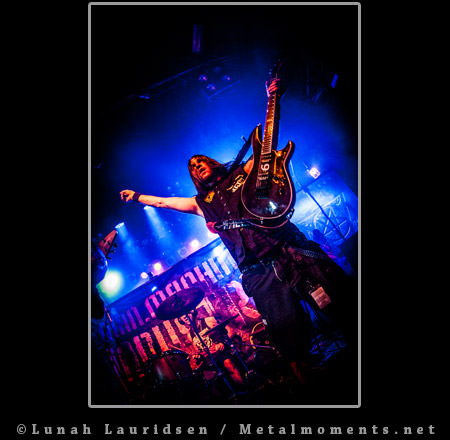 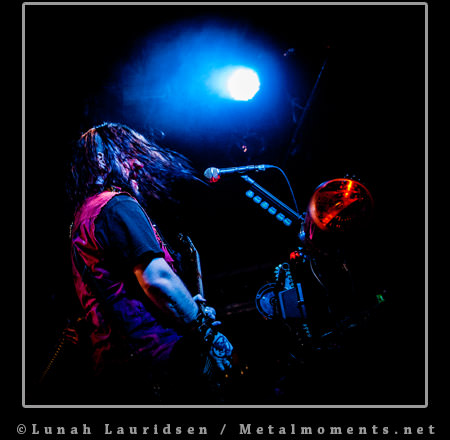 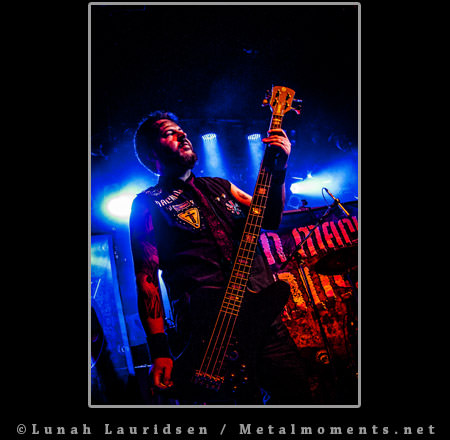 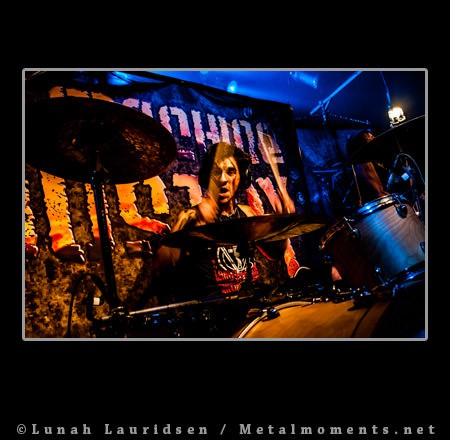 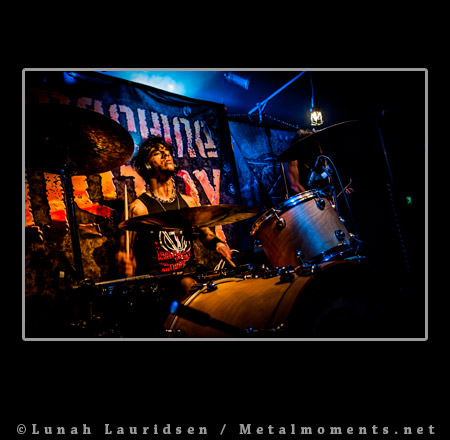 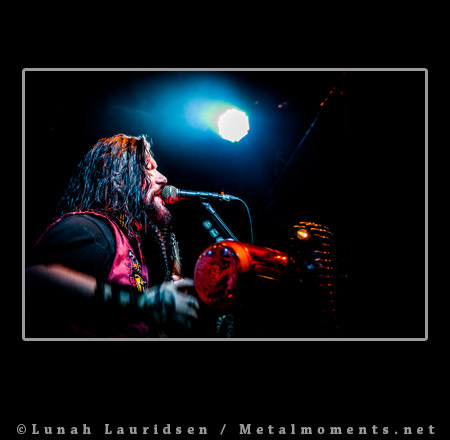 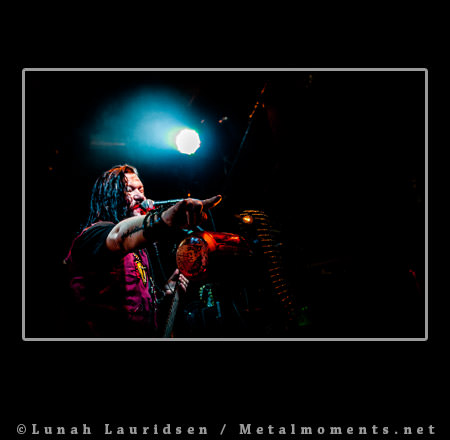 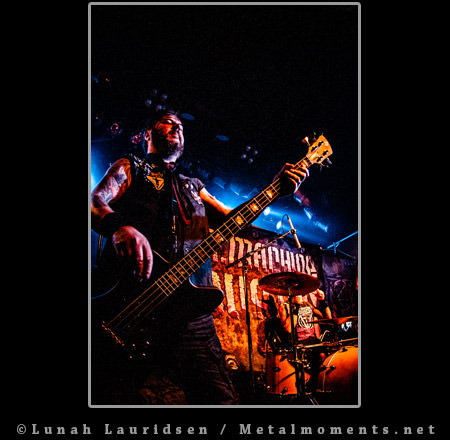 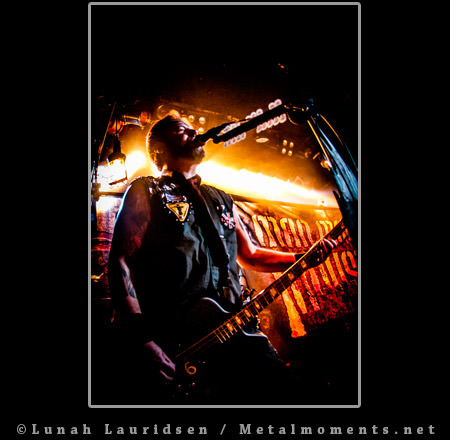 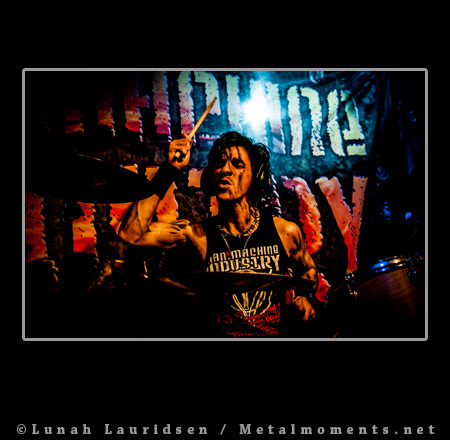 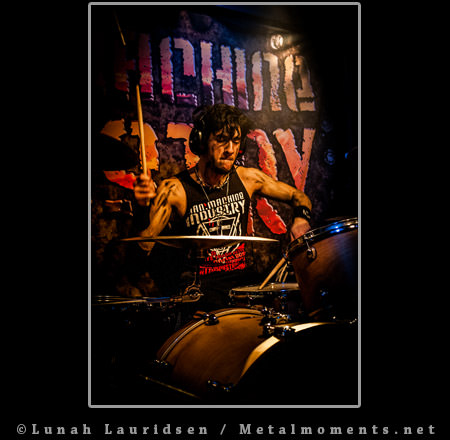 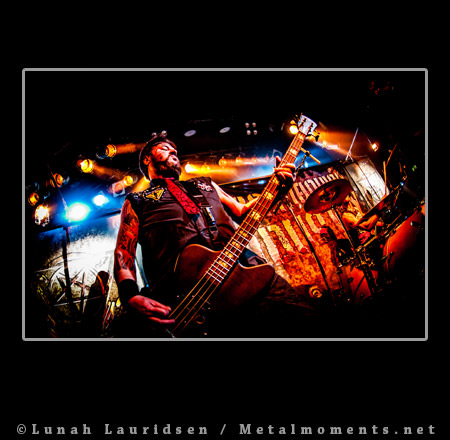 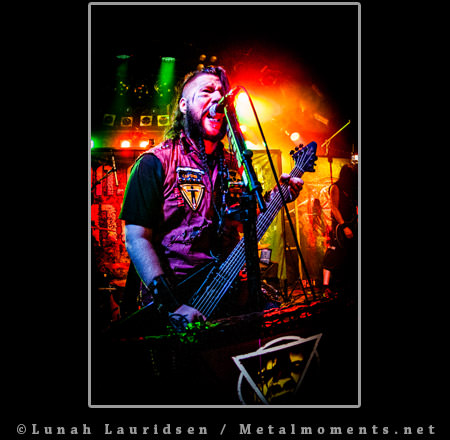 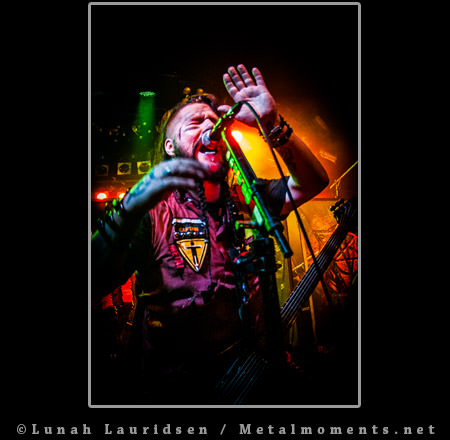 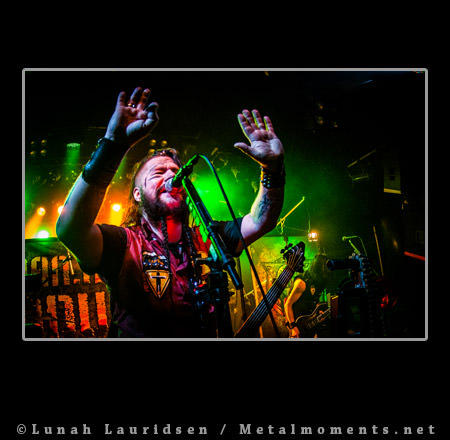 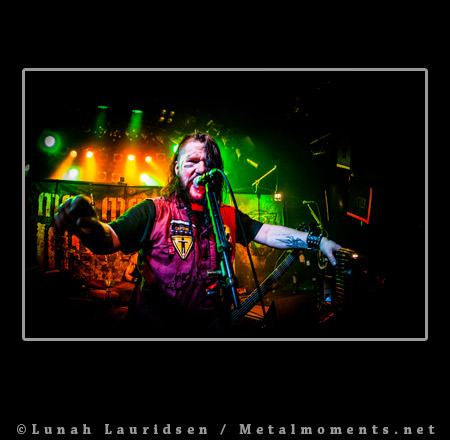 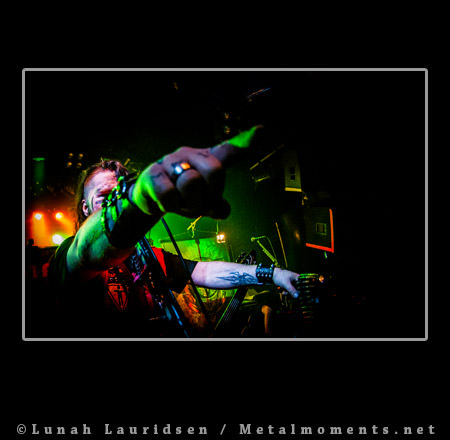 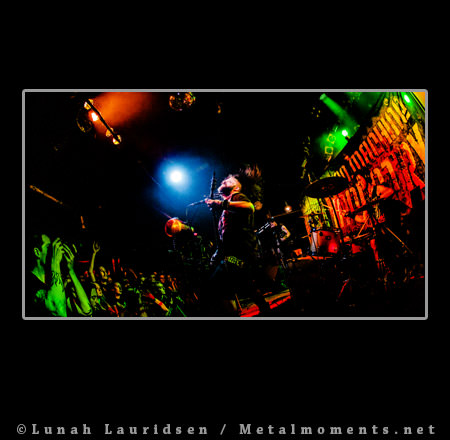 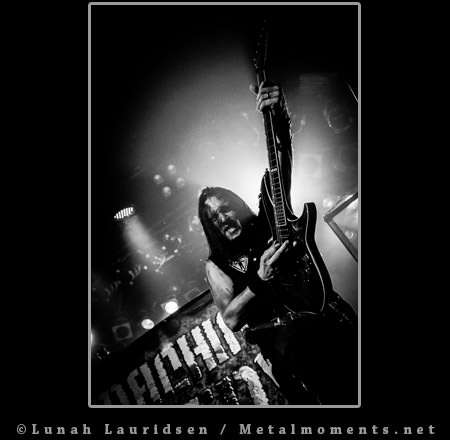 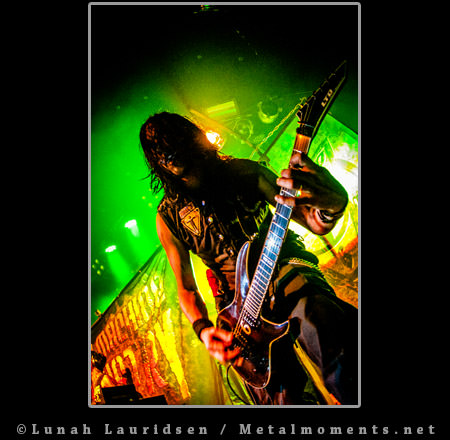 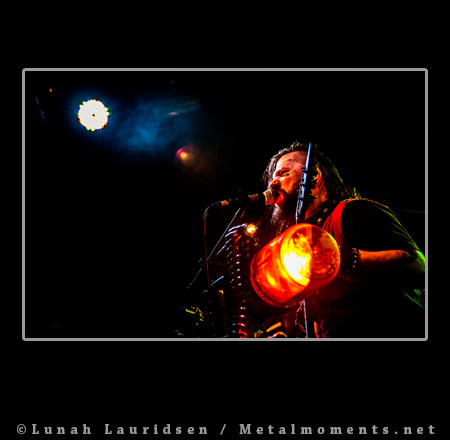 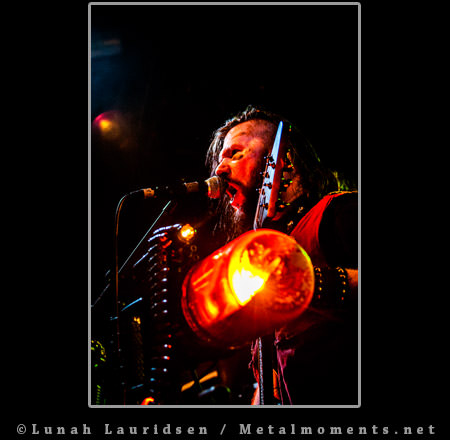 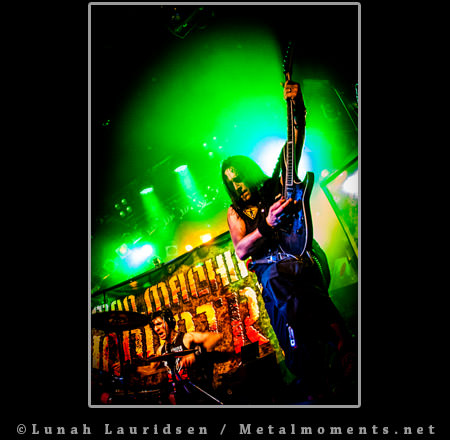 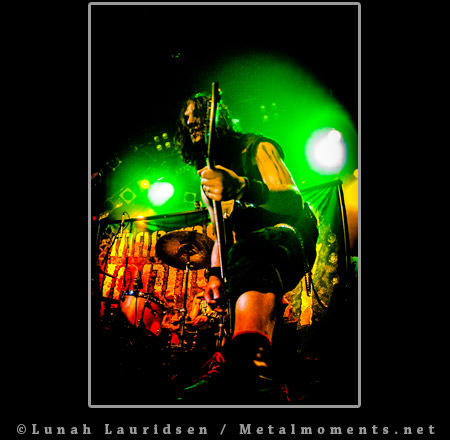 Man.Machine.Industry was a strange size.
A solo project started out around the beginning of the millennium by frontman J. Bergman, which have since seen a lot of coming and going on the musician side.
An industrial metal outfit with a huge chunk of other influences weaved in.
A support band with more stage decorations than the headliner.

Yes, Man.Machine.Industry was a lot of things, among others a band I had never heard of before. Their name surely suggested what the overall sound would be like, but apart from that I really didn’t know what to expect.
Beginning the gig with the opening thunder and riff of Black Sabbath’s eponymous track was of course a pleaser, but I was at this time more interested in what the plans were for all of the equipment they had dragged on stage – as Raubtier’s (the headliner of the evening) drums and miscellanea took up much of the already not too large stage, I was impressed that Man.Machine.Industry had found place for, and found it advisable, to have a backdrop, stage banners, garage lights and the largest mic stand I have ever seen taking up even more of the already cramped space. The mic stand was a wide metal construction which had a video screen in the middle and flash lights and large orange industry lights on either side.
The band members, upon entering the stage and diving headlong in to the first song, seemed at ease in the surroundings though and showed no hindrance in moving about as they pleased.

To begin with, I didn’t quite know what to make of them; was this just a gimmicky thing or was there real intent behind it all? Had I known their history it would have been plain to me, but alas I did not at the time.
Thus, as my mind was occupied with these questions I wasn’t instantly grabbed by the music, and as the rest of the rather well-filled KB crowd didn’t get immediately into the action, I assumed I wasn’t the only one having a first time experience here.
The band played on though, and with convincing smiles from Bergman and a lot of action from his troops it didn’t take long to warm up to their performance. For a band with a limited time on stage, Bergman was quite talkative which definitely was a positive trait as he introduced his band well to us. Still, music was slung out as well, lots of it, and during the songs all of the members were equally enthusiastic in getting the show going – the drummer was maniacally beating the surprisingly limited kit he had, the bass player was parting ways with more picks than there were people in the crowd (give or take a few), and the guitarist often found time to head-butt the hanging lamp above him when he wasn’t out on the monitors to sweat on the audience.

“You’re too damn quiet, when I raise my arm you shall scream!”
- Bergman (vocals/guitar)

In the beginning there wasn’t much response from the audiences’ side, that is true, but with especially Bergman’s effort to get us to sing along like there was no tomorrow, more and more opened up and joined the party. The easiest participation we got was in what I’m highly assuming was Who I Am Is How I Kill (correction, it was a song called simply Kill), where we just had to scream “kill”, but joining in on the “freedom call” (no connection to the band) in To A Blood Red Sky, and dancing for Vivite Et Sinite Mori (Live & Let Die) was also great fun.
Aim! Hold! Fire! was the last song of the evening, but as Man.Machine.Industry had a little bit more energy in them, they played the opening Black Sabbath riff again as an outro, only this time it was played live by the band.
I’m not yet convinced enough to go out and buy one of their albums, for that they are still a bit of a strange size for me, but Man.Machine.Industry did convince me of why they had the opening spot for Raubtier, that’s for sure – the show may have started out on the ground floor, but it had been an express elevator ride upwards from there on out, a ride that left me with a big smile on my face!