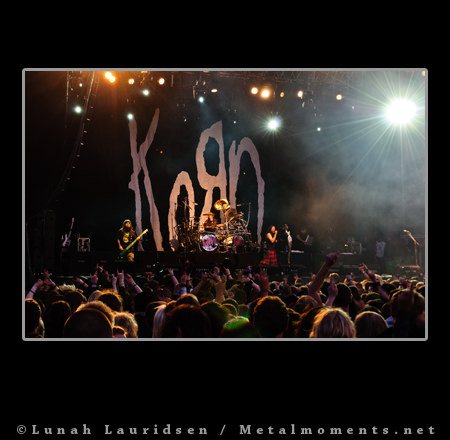 Korn was probably one of the most discussed bands on the line-up for Copenhell 2011. As always, there was the group of old-school keeping it real guys who by definition have to hate anything that has been released after 1989, and then there was everyone else who were excited as hell about having a huge international hit to see and listen to.
I myself fall somewhere in between I think; I really like what Korn was doing in the start and up through several albums, but I haven’t really kept up to date with all of their doings and feel no direct need to do so either. Still, I was interested in seeing what they would bring to the festivities of Copenhell, and so to the Helvíti stage I went.

To my great luck and enjoyment, the band kicked the party off with a real old-school (for these guys that is) classic, Blind! If this wouldn’t wake people from the sleeping pill called Opeth, I don’t know what would; and of course it did. Jumping and moshing commenced in a large section of the front crowd, and even the back was seen gently swaying along to the rhythm. A nice long set followed in its wake, sharing both old favourites with us, as well as plenty of newer material of which I was not too familiar with but could easily enough recognize as part of the Korn sound and attitude, making it easy enough to party along to.
The old bagpipe got its time in the lime-light as well of course, as it was used to introduce Shoots And Ladders, which towards the end changed in to the Metallica classic One; this really let the crowd-vocalists have their fifteen minutes of fame, and everyone seemed to love shouting along to the familiar words.

I myself was not entirely convinced of the bands efforts for a while though, and I didn’t start to really get into it until Ball Tongue was played, after which I felt right at home and very comfortable with what I heard.
There wasn’t really a finger to point at the bands performance which was played out pretty much as you would expect a live show from Korn; I would however not have minded a bit more audience contact, just a few more words here and there. On the other hand, the band was pressed by time to get through all of their material, and several songs were played as medley’s just to get a few more titles in there. I’ve already mentioned the Shoots And Ladders / One combo, and for the end the band had prepared a giant medley combining both songs I knew, songs I didn’t know and one more cover, We Will Rock You by Queen.

So, an ok show to begin with which grew to be something very entertaining by the time everyone was warmed up. Quite possibly the best performance of the first day of Copenhell.