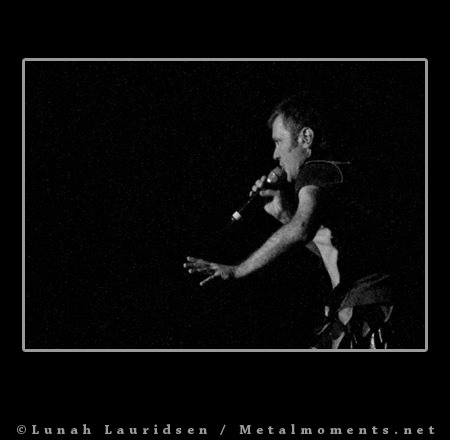 I'll be perfectly honest with you; I was fairly intoxicated by the mighty beer at this show. And when Lunah came over and said that we'd probably skip reviewing this show, since she thought the pictures wouldn't add up to anything, well, let's just say it didn't help the situation. So, I felt like I was in quite a tight spot the day after when she told me that there were definitely a couple of pictures that could be saved, and that we should do a review anyway...

So, what can I say?
Well, the show was pretty much the same thing as we had seen at Graspop earlier on the tour, with the same setlist and stage show. Of course, the set is probably not the easiest thing in the world to change when it's such an integrated part of the show together with backdrop changes, costumes and all the rest.
The band felt really on top, but then again, when doesn't Maiden feel like they're doing their best show ever? The only problem for us was that we weren't in a very good position. We were quite far away, and also we had gotten a bit too far out to the side, so the 'side-arms' of the stage were again blocking some of our view, just as it had done at Graspop.
Then again, it was an absolutely amazing thing to finally see Iron Maiden at Wacken, and I promise you that all 75000 visitors were there to witness it. Wacken has seen some crowded times before, but this was ridiculous! And this was even though the management had put up several large screens all over the festival and camp area to lighten the pressure in front of the stages. It was a good initiative, but there were still a lot of people who wanted to experience the real deal.

So, Iron Maiden at Wacken is clearly a good thing, and we surely hope to see more of this in the future.