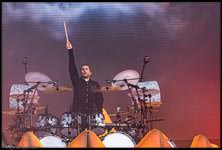 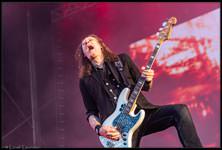 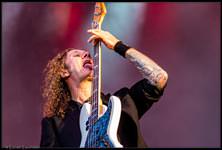 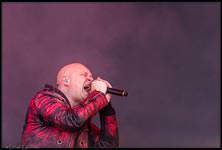 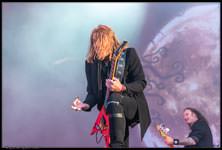 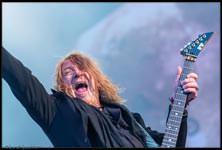 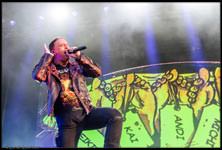 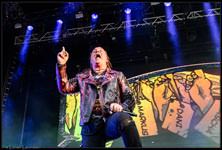 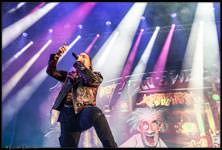 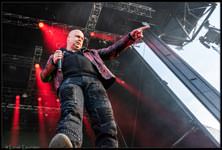 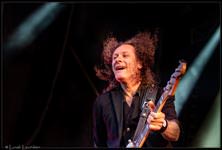 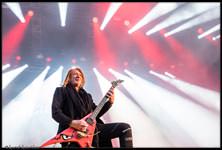 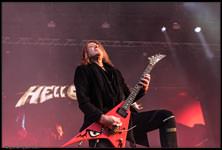 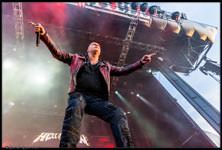 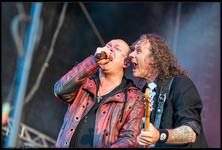 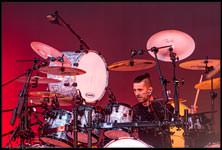 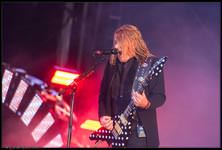 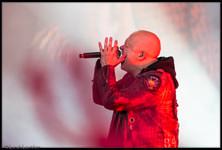 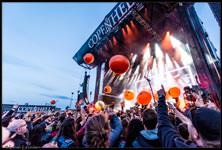 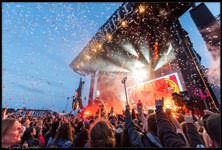 Helloween was one of, if not the first metal band that I got into on my own, and have of course had a huge impact on me through the years. I will not take anything away from the Andi Deris era, which has produced several great songs and albums, but nostalgia dictates that the Michael Kiske era is what’s the bee’s knees for me.
Alas, I was too young to ever see them live in this guise, so when the Pumpkins United tour was announced to hit Copenhell, it immediately became my number one concert to see.

“Are you ready for some 80ies metal?!”
- Kai Hansen (vocals/guitar)

I was clearly not the only one looking forward to this gigantic show - the size of the crowd in front of the Helvíti stage made it look like we were in for the headliner of the day. Given the actual headliner was Ghost, this was closer to the truth for me, than not.
Oddly, it was the classic song Halloween that worked as the band’s intro tune, being played over the PA when the show was about to start. It didn’t take long though, before the band entered and took over from the pre-recorded stuff, and for every man entering, the cheers became louder.
To make it clear, Pumpkins United took the current Helloween line-up of Markus Grosskopf (bass), Michael Weikath (guitar), Andi Deris (vocals), Sascha Gerstner (guitar), and Dani Löble (drums), and (re)united them with Kai Hansen (vocals/guitar), and Michael Kiske (vocals). So save for the late great Ingo Schwichtenberg, this was as close to the classic line-up that we’ll ever get, and it was wonderful to see all of these guys together on the stage.

As I mentioned, everyone came on stage for the take-over of Halloween, Deris and Kiske ended up sharing vocals on this song - parts of it they took on individually, and a few parts they sang in unison. It was an edited down version of the song however, and it was time to move on with the schedule. Dr. Stein was next, and the two vocalists kept the back and forth up. The banter and jesting between the two showed us that they were certainly having a good time, but at the same time it felt a bit odd in the construct of things. Oh well, I wasn’t about to complain, my childhood heroes were together again on stage, and I was pretty damned happy about it.
When the band then moved into Deris era songs, Kiske left the stage so that the ‘new’ crew together with Hansen played alone. It made sense in a way, yet while as stated I enjoy Helloween as it is, I didn't think this was what this special show was about - at the moment they didn’t seem all that united.

Next up was a compilation of very old songs, and for this Deris left the stage as well, letting Hansen take over vocal duties for the songs he’d originally sung on back in the day. It was equally un-united I guess, but it was also damn entertaining, and got to show just how much hansen has grown as a vocalist since the early 80ies. For Heavy Metal (Is The Law), the king of crowd sing-alongs even started up a “heavy metal” chant in the crowd, although given the man behind it, I’d have to say it was very modest in length.
Deris came back Power, and even though it’s a Walls Of Jericho oldie, How Many Tears saw all three singers join in together. This song also gave Hansen, Weikath, and Gerstner a chance to show off their guitar skills, as it was shortly interrupted by a guitar solo (for three), before moving back for the finish. Nothing against Gerstner or his skill, but he did seem a bit out of place here.
Was the show over then? No, of course not. While the band caught a collective breath outside, Invitation played over the PA, hinting in a very definite way at what was next. Finally, it was time for Kiske to shine on his own as well, just as the other two had done before him, and I was stoked!
Now, if Halloween had been edited down, it was nothing against the surprise that Keeper Of The Seven keys had been cut straight through, leaving the very end placed at the beginning, and a band introduction thrown in after a very short version of the opening, for no other apparent reason than confusing us fans. Deris was back here, figuratively and literally lending a hand (the latter part made both singers break down laughing). God damnit, this is the flagship song of the band, and this is how you treat it? I shake my head at you, and not in the headbanging sort of way.

A short intermission more, and a short guitar solo featuring the In The Hall Of The Mountain King melody played by Hansen lead our way into the final two songs of the set, Future World with Kiske, and I Want Out with Kiske and Deris on vocals.
I realise I haven’t mentioned the musicians much yet, and there’s a pretty good reason for it. They were all delivering a good, albeit slightly standard performance. In a band such as Helloween, you know that means there’s some pretty funny jokes mixed in, and a heck of a lot of posing as well, but I wasn’t blown away by anything in particular. Weikath had beautifully pumpkin painted Flying V, and he also had the most disinterested look on his face of any artist here. To be fair though, that’s how he looks pretty much all the time.

So how did Helloween and Pumpkins United measure up to my impossibly high expectations? Fairly well, I’d say. There was a lot of goodness, but also some unfocused silliness along the way. They could easily have fit some more songs in there, by skipping some of the latter, but we got a good and varied setlist nonetheless.
Most importantly though, after this there can be no more debate about who’s the best singer Helloween has had - after warming up a bit in the start, Kiske was a God on the mic, and blew the other two out of the water!