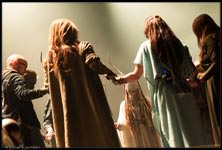 Despite not being the least a metal band, the traditional / folk / whathaveyou band Heilung had already in their relatively short existence made a big splash in the metal community, which has opened the band with open arms, it would seem.
No wonder then, that the (as far as I can tell) trio had their debut on the Hades stage, and not only that - they got to play it as the last act of the day!

To me, Heilung was still an unwritten page, as I had not actually heard their music, except for some short snippets here and there, but I was curious about what the hype was all about.
With a good mood firmly established by some good bands earlier in the day, we made our way over the Hades.

The show opened to the sound of bird song and a light forest rain. We could see a lot of odd equipment on stage, and regular equipment dressed up in odd ways. The band was obviously setting a mood up, and this was underlined and put in bold by the fact that the entire live band (lots more people than seem to make up the studio version of the band) stood in a circle on the stage and chanted something incomprehensible. Well, I say incomprehensible, but the fact was that we could follow along anyway, as the words of the chant were displayed on the video screen backdrop. It felt odd to me that some English was mixed into the pot, but apparently that’s something they do, so there’s that.

When the show truly started, the band broke apart and took their individual spots around the stage, but they managed to keep the atmosphere of that initial chant going quite well anyway.
From time to time, just to enhance the show I guess, the musicians were joined on stage by viking warriors.
Whereas the musicians held their chanty, laid back attitude, the warriors looked to be more ecstatic. They displayed animalistic movement in their ferocious dancing, and didn’t shy away from stepping down onto the speakers in front of the stage, and even taking to the security fence, straight in the face of the fans.

Heilung was certainly a very intense, and very different experience, I’ll grant them that. Maybe that’s why they’ve made such a splash, or maybe the metal community is just all hopped up on viking stuff in general.
For my own part, I can say that I’m glad I have finally seen the act and the performance, as it was a one of a kind experience, but on the other hand, it wasn’t an experience that got its hooks in me, not this time around.