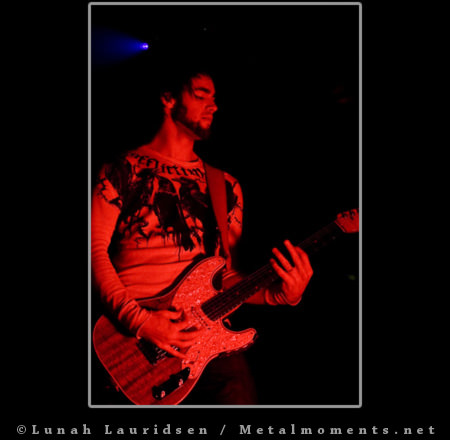 So, the second band for the evening was Flyleaf, delivering some hot American rock. I'd never heard of these guys (and gal) before, and it seemed that no one else around me had either. For this reason I thought it rather strange to put them on after Deathstars, which are pretty well-known around these parts, but there you are...

I really didn't get much out of their music, so I just tried to focus on the show.
I have to admit that they were very energetic on stage, especially so Lacey Mosley, vocals, and Pat Seals on bass. Sadly, it all felt a bit too rehearsed, and a general connection with the audience was lacking, in my opinion. It was as though they didn't really get their show all the way out over the edge of the stage, but kind of kept it to themselves. Neither did they get much response from the audience, which was at their most quiet and calm for the whole evening.
There were a few interesting touches though, for instance when one of the guitarists, Sameer Bhattacharya I believe it was, used a violin bow to play with. It also amazed me that Seals didn't manage to break his legs from any of his daring jumps, one of which was from a stack of speaker higher than himself!

All in all though, I felt that this was as good an opportunity as any to go and refill my beer cup.