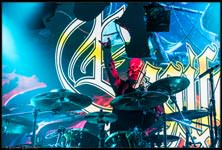 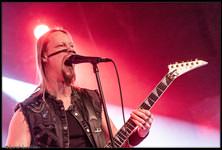 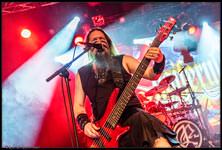 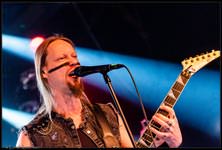 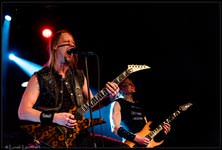 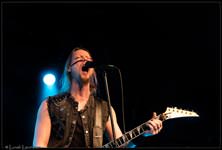 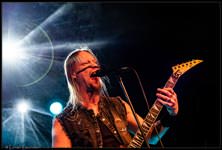 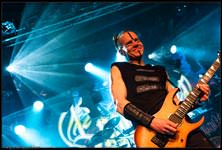 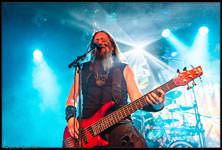 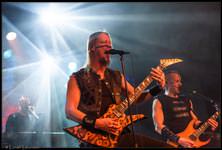 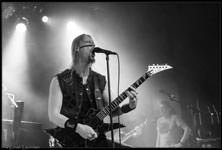 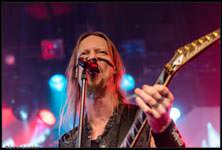 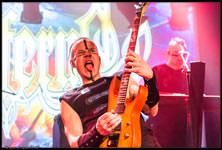 It was a Swedish/Finnish co-headlining tour that hit Pumpehuset, Copenhagen, in early April, and of the two, Ensiferum was first to hit the stage.
I have no idea if it is like this every night, or how they decide who goes first when, but it sat right by me, and judging from the packed room, the audience were happy to see the band as well.

“It feels good to be back on the road and see all you people again, especially you beer drinkers!”
- Petri Lindroos (vocals/guitar)

Ensiferum opened their show by leading us confidently into their latest album, Thalassic, by using the first track, Seafarer’s Dream, as an intro to the show, and then kicking it off by themselves with first Rum, Women, Victory, followed by Andromeda, just like on said album. For good reason, this being an album released in 2020, no one had really experienced any of these tracks in a live setting before, so I’m sure it was as interesting for the band as everyone else to see the fans’ reactions to Ensiferum’s new material.
Well, the reaction was good, and even though none of the songs can rightly be called live classics yet, people were more than happy to sing along as well as they could, and otherwise just shout and rock out.
For Sirens and Run From The Crushing Tide were also picked from Thalassic, making this album take up almost half the playing time of the band’s setlist. The latter saw a good moshpit form, after Lindroos asked for it, and it also saw newest band member Pekka Montin, keyboards and clean vocals, leave his instrument and take up position in the front to deliver some good harmonies to Lindroos’ screams. Those high blasted through the room like nothing I’ve heard from this band before, and Montin seemed to fit well with the rest of the band as a performing artist as well.

“Alrighty then, brothers and sisters of Copenhagen…”
- Sami Hinkka (bass/vocals)

Even with the response to the new album being as good as anyone could expect, it was of course the live favourites that garnished the loudest cheers. Especially the final trio of In My Sword I Trust, LAI LAI HEI, and From Afar really got the audience going, the last one getting a large mosh activity to go out on, now that the fans were well and truly warmed up. We did miss Iron though, but I guess the band wanted to mix it up a little from the standard formula, which is fine. Next time though…

For a co-headlining tour, I thought the Ensiferum part felt a bit short, to be honest. 10 songs aren’t that much, and they didn’t spend much time between songs talking or the like either.
The band was quite obviously lit and enthusiastic to be playing again though, and their new addition in Montin worked out well.
Sadly, I wasn’t completely on board with the band this night. It’s not that there was anything wrong with the show, I just wasn’t completely pulled into it, like I have been some times in the past, and I missed that. Still, a good effort from the Finnish side of the combo.