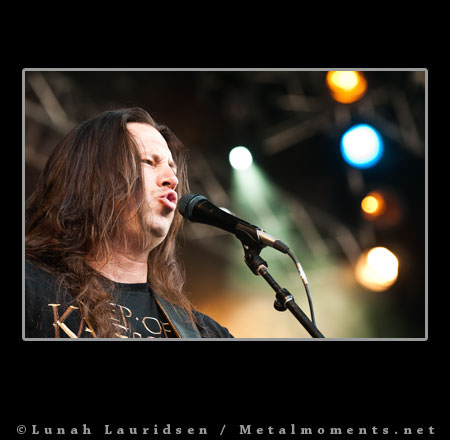 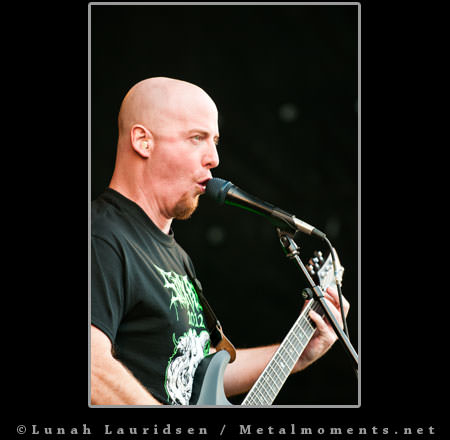 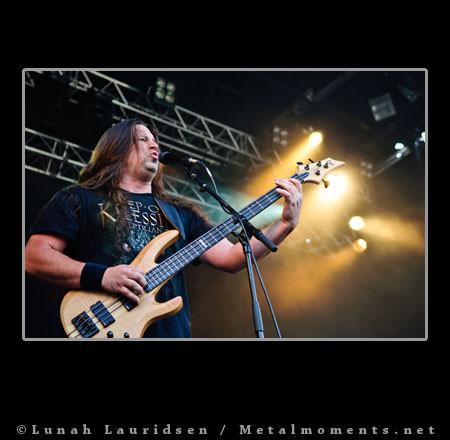 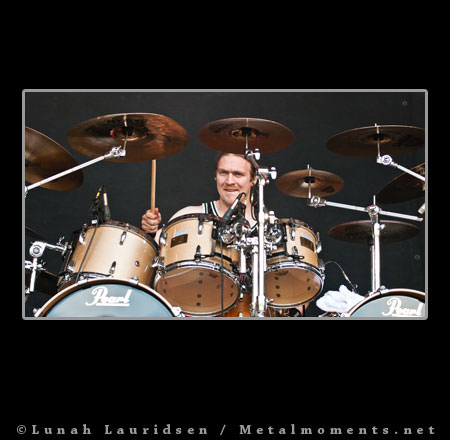 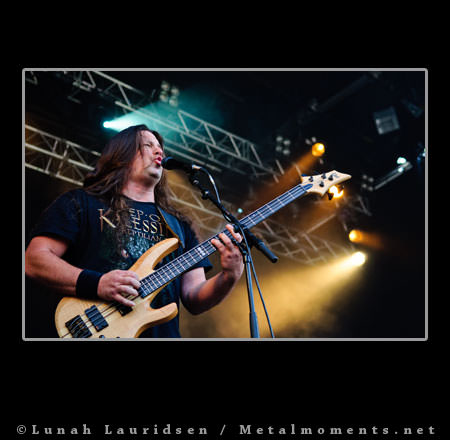 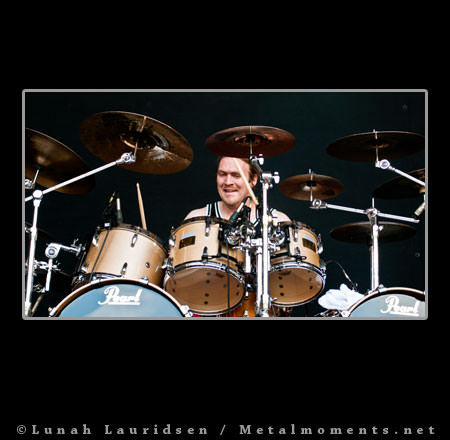 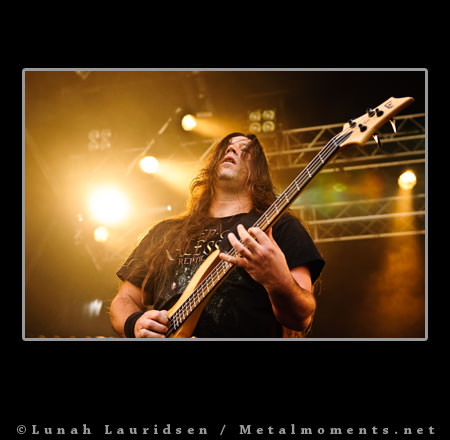 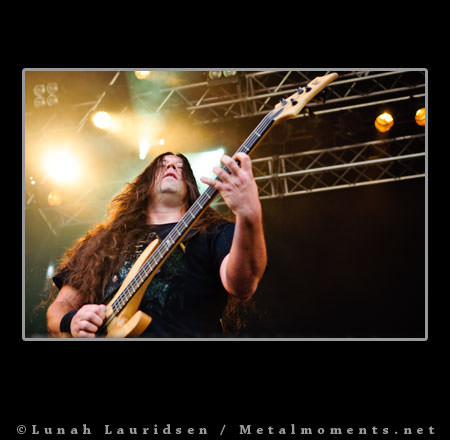 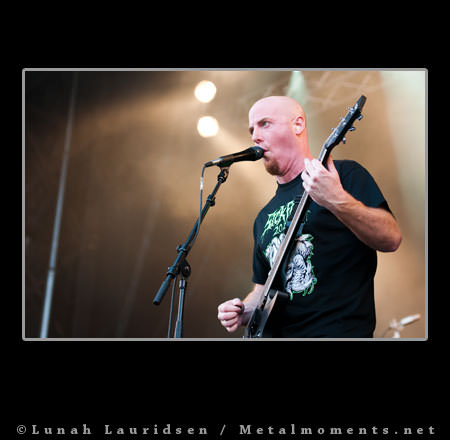 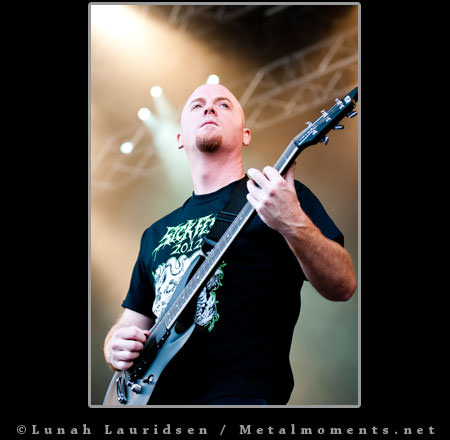 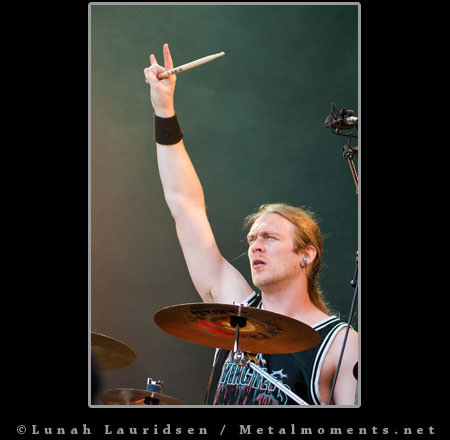 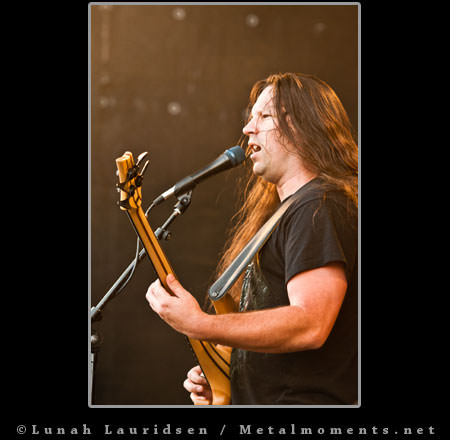 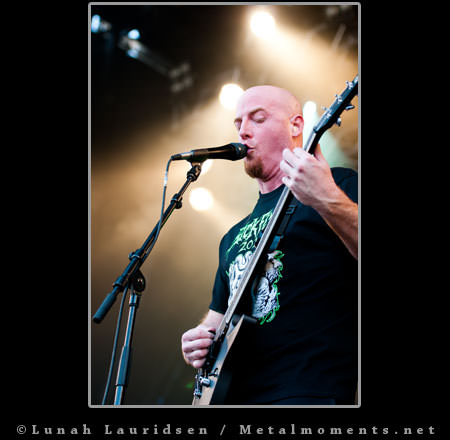 I knew full well when going in that the extreme death metal of Dying Fetus was not going to be something for me, but then again, I had been very pleasantly surprised by Brutal Truth the day before, which I had entered into under the same premises. Also, I was still in a very good mood after the recently ended Saxon show, so I figured this might just be another one of those surprises.

So, what did we get then?
Well, we got three angry Americans on the Hades stage to begin with.
We also got our brains blasted out by loud, high-speed tech death.
More than that though, we got a band which clearly had no idea what it means to play a live gig. Now don’t get me wrong, I appreciate that these guys put a lot of time and effort into making some highly technical stuff, and that in playing this you need to pay a lot of attention not to make too many mistakes, or any for that matter. The thing is, if all I was going for was extreme precision and timing, I would have stayed at home and listened to a CD on the old stereo. That, at least, would have given me a proper sound for this kind of thing. As a side-note here, I would like to add that the sound wasn’t very good at the Dying Fetus show, so all of their concentration was for naught, as more or less nothing of it made its way through the speakers and into the audience’s ears.
Back on topic though, I go to concerts to be entertained, and that requires a band which grabs my attention. It doesn’t have to be funny, like Brutal Truth, but it has to convey some sort of emotion to grab on to, and this in turn requires some form of performance from the band or artist that I’m watching.
When it came to Dying Fetus, there was nothing. Not a goddamn thing.

Apparently, vocalist/guitarist (and only remaining founding member) John Gallagher had a different idea of how things should be done though, as he commented (looking quite serious about it); “Hey, we just flew in from the States, and we’re pretty tired. You guys have to wake us up.”
Now, I’m sorry that I have to be the one bursting the bubble here, and I would have thought that someone might have done it already considering how far into your career you guys are by now, but here’s the deal – we paid for your show, not the other way around. So you are here to entertain us, again not the other way around.
I admit the best shows out there are when the band and the crowd share energy with each other, giving and taking to make it become something even bigger, and sometimes the audience is only a taker of energy while not really giving much back to the band. If you are a professional musician, I am sure you’ve tried this situation several times in your career, and even though this can also be considered a good show, it will never reach the same epic heights as the former example. Never, never ever though, do you go to a show and let the audience do all the work while the band just stands there, it’s just not right!

Getting that rant of my chest, I must give credit to some of the Dying Fetus fans present today. Without really deserving it, they actually did get an ok response in the form of a little moshpit in the middle, and several raised arms and horns, as well as loud, appreciative shouts between songs.
Looking away from the fact 90-95% of the crowd was male at this show (at the festival as a whole, the percentage was far closer to being equal, albeit still with a small advantage to men (or women, if you went there to find someone to bring home)), I was constantly reminded of a meme I had seen posted on Facebook recently, where on top of a picture of Karl Sanders these words were written; ”Played that bitch some tech death. Bitches love tech death.”

Honestly, this was even worse than I had initially feared; it was so pointless actually, that I left early.
I normally scoff at reporters who review a whole gig from seeing a single or two songs, but honestly, this band was giving me nothing to work with, nothing at all. I so much needed a beer after this...

Homicidal Retribution
From Womb To Waste
One Shot, One Kill
Killing On Adrenaline