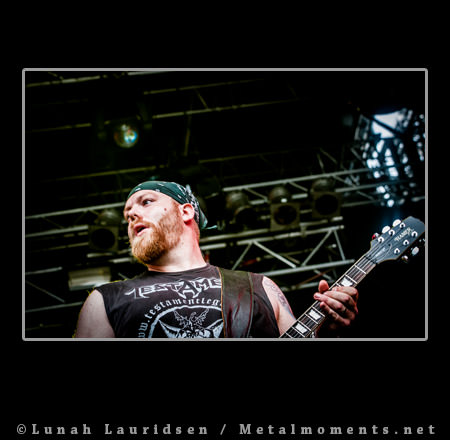 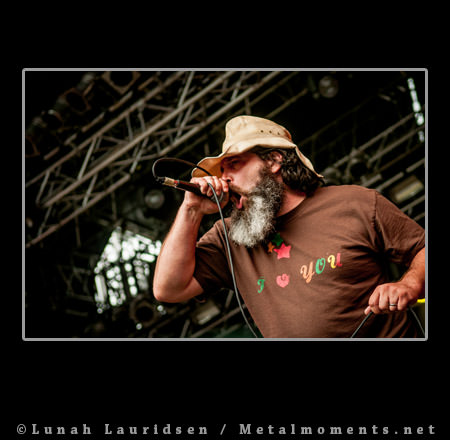 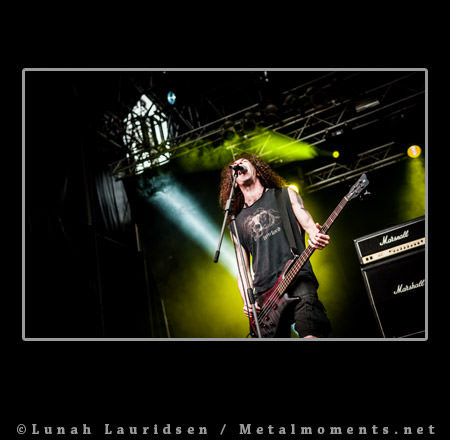 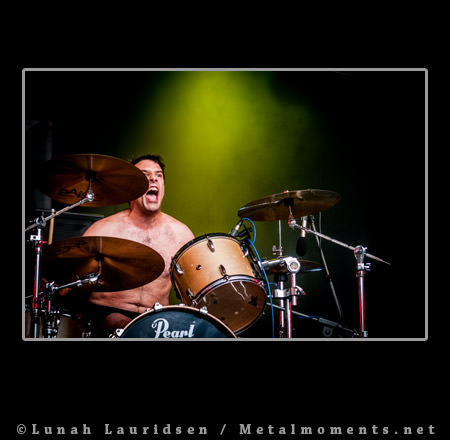 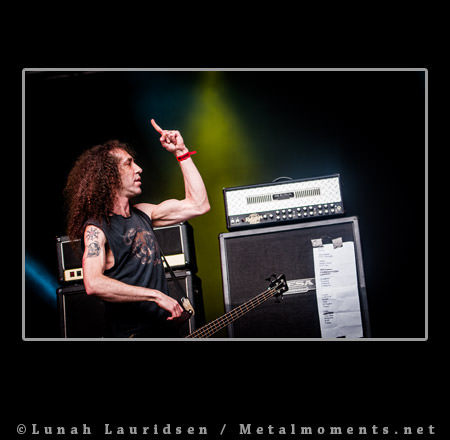 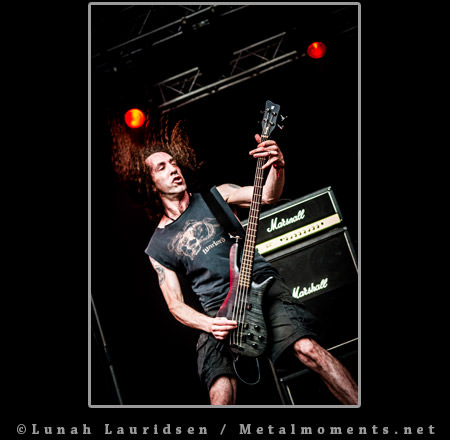 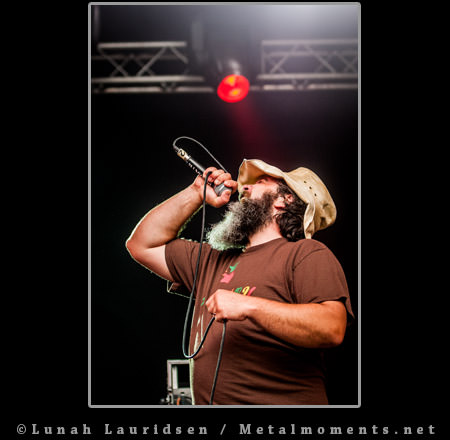 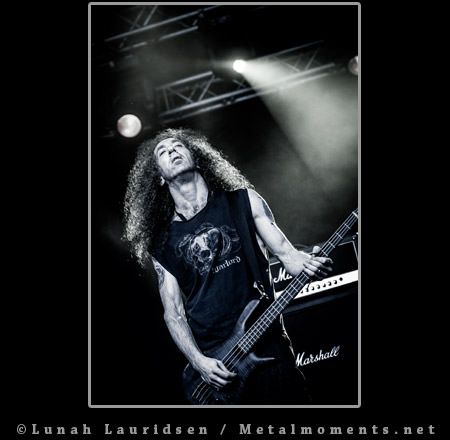 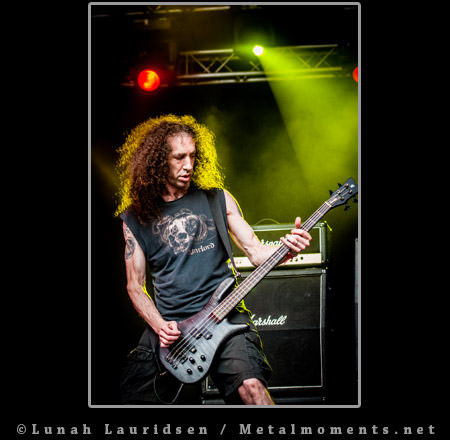 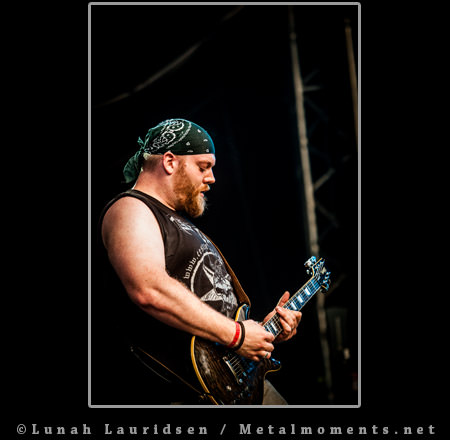 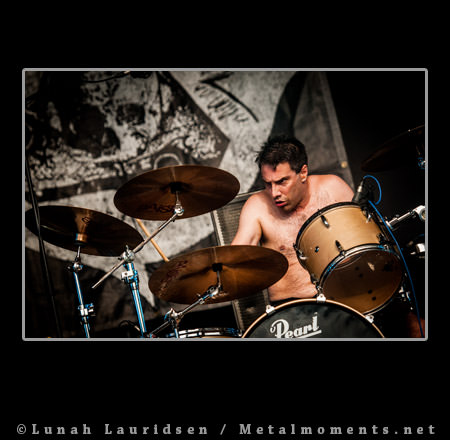 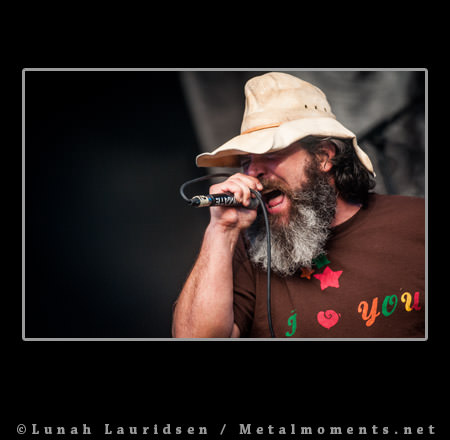 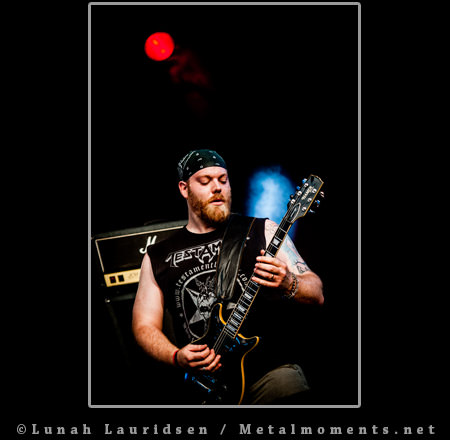 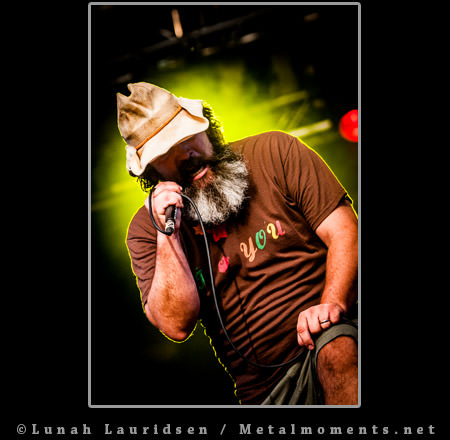 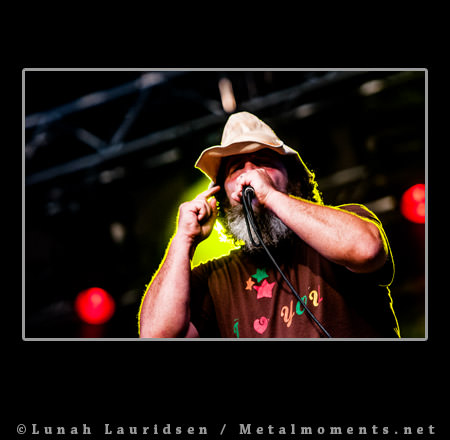 As Brutal Truth hit the main stage at Metaldays as not only our second band today, but also our second grindcore band today (Dickless Tracy had opened the stage earlier on), the weather was still most enough to dribble down on us in a gentle fashion.

“How are you all doing, a little wet behind the ears?”
- Kevin Sharp (vocals)

A gentle fashion was of course about as far away as one could get from the type of crushing music Brutal Truth was about to deliver, but somehow it fit pretty well with the style of Kevin Sharp, as he trod the stage barefoot, wearing a big cowboy hat and a brown t-shirt with an I Love You print on it. I recalled the great time I had experienced with the band at Copenhell the year before, and it seemed like we were about to get treated to something similar here in Slovenia.

The band had a lot of material to cover, and as anyone knows, grindcore songs aren’t the longest in the industry, but still there wasn’t much time for the band to stand around and talk. Even so, Sharp did get some sharp remarks in once in a while, but mostly it was just crushing heaviness and aggression from start to finish.
The band performed admirably, one and all, but this day it was definitely madcap drummer Richard Hoak that made the most lasting impression – the possibly smallest drumkit on the entire festival allowed for a pretty good view of the man, and I must say that his facial expressions that went along with the music were priceless! Really entertaining, and in a good way!
Brutal Truth started out with some really old material, and in fact most of the songs played came from their first album, but the band got generously around their entire history, with several visits to the two post-reunion albums as well. This should please any true fan, but as I’m still a complete novice to their treasure trove of brutality I couldn’t really tell which era we visited at any given place in the set.

“Son, your pants are falling off. What if you need to go to the dentist, you’ll have dirty underwear.”
- Sharp (vocals)

Even though the sun had peeked out from behind grey skies to check out Brutal Truth, there was still a muddy pit in the middle of the grounds, and fans weren’t late to use this as a playground during the concert.
Brutal Truth hadn’t pulled a huge crowd, but standing only slightly spread out the Metaldays people still covered a lot of area. Apart from the aforementioned mud-wrestling, there wasn’t much action so far, but it was still pretty early on in the day, and because of the shifty weather we were just beginning to get warmed up by now.
Despite the bands good efforts though, they never reached the same heights as they had at Copenhell, not for me anyway. Maybe my expectations had just gone wildly out of control after that show, well ok, they had definitely done that, but even if Brutal Truth didn’t hit the same high note this time around, they still managed to delivered a hell of a pleasant (if such a word may be used in grindcore context) and highly entertaining show. I surely have not given up hope, and look forward to our next encounter.