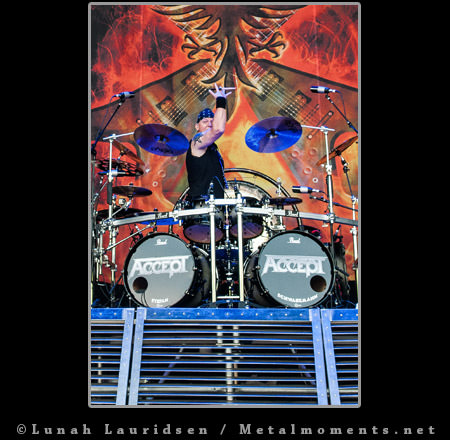 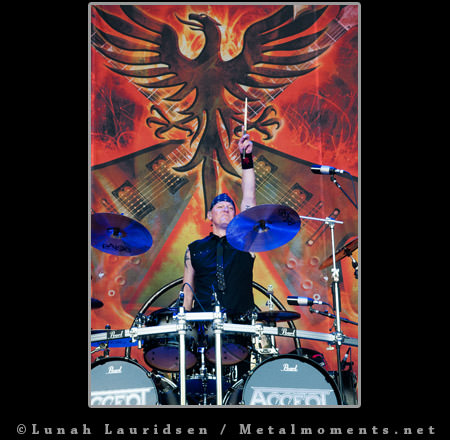 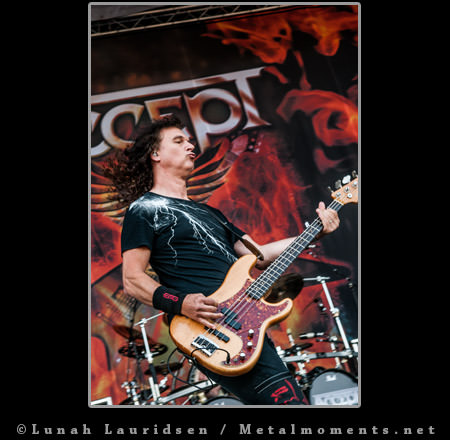 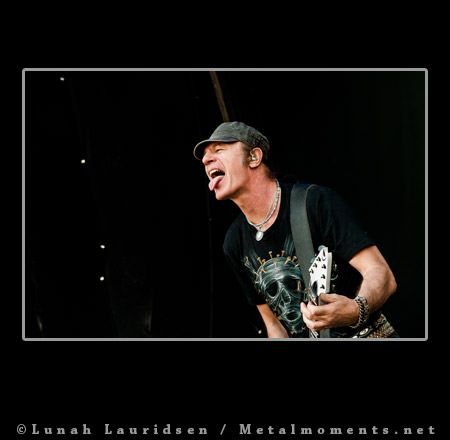 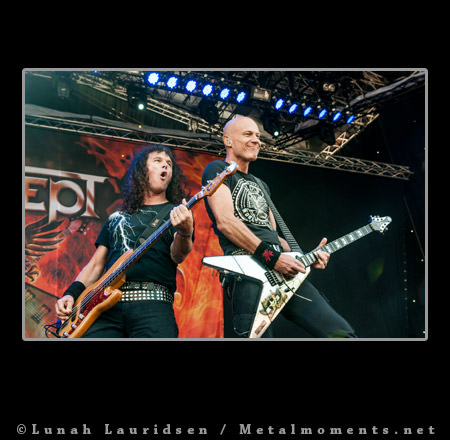 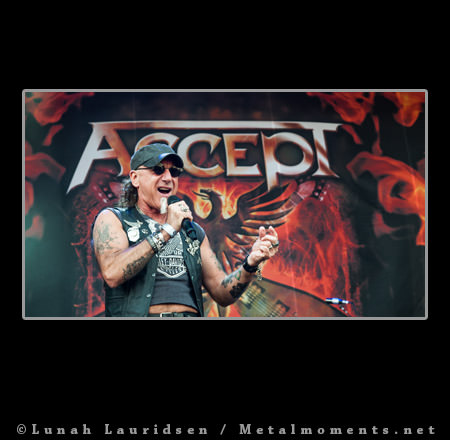 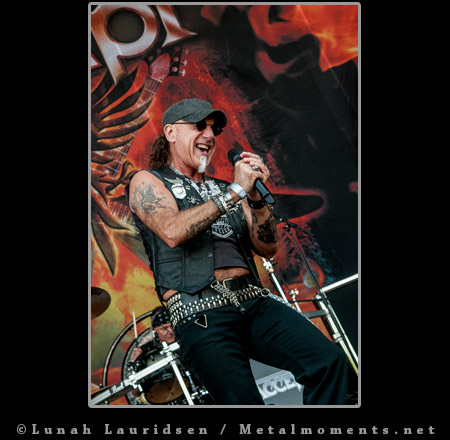 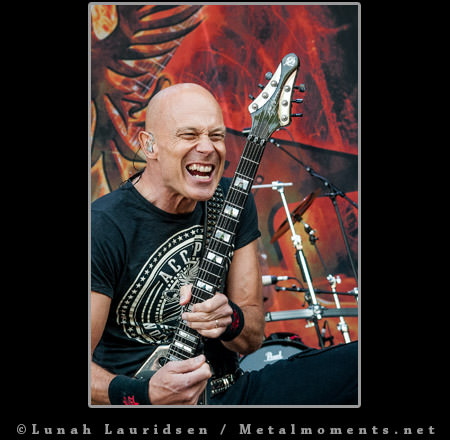 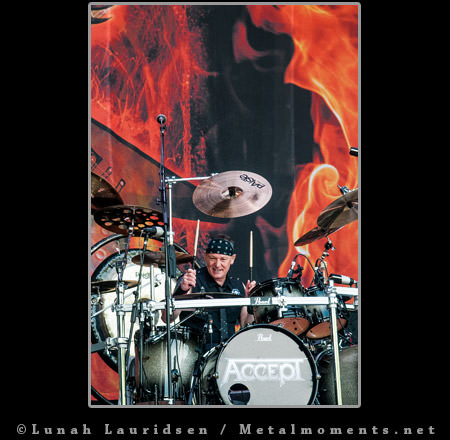 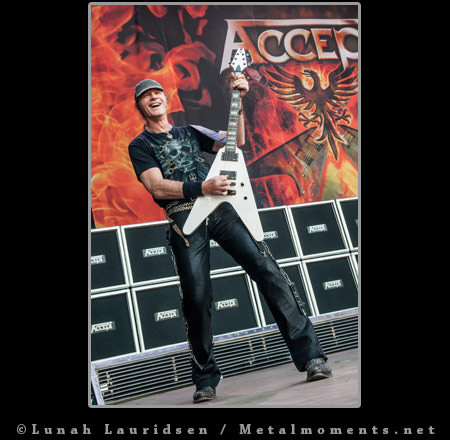 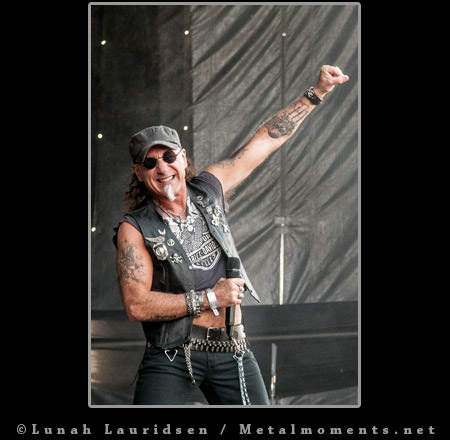 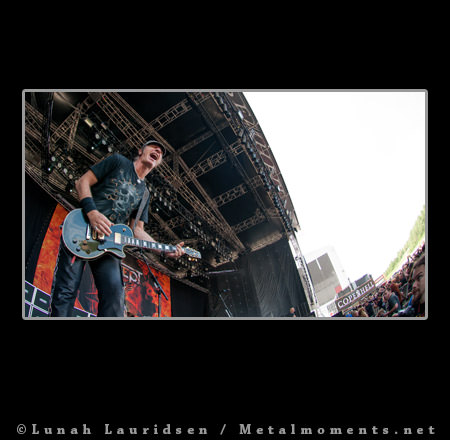 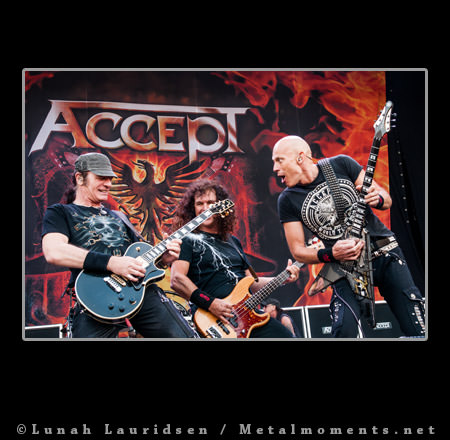 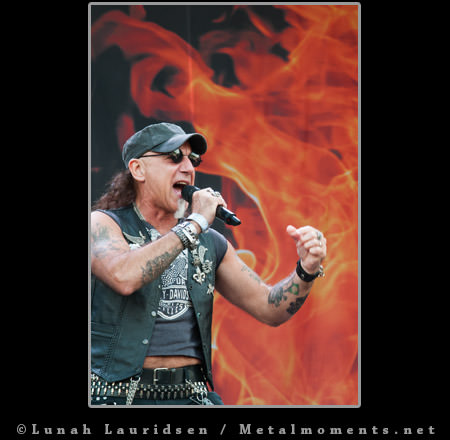 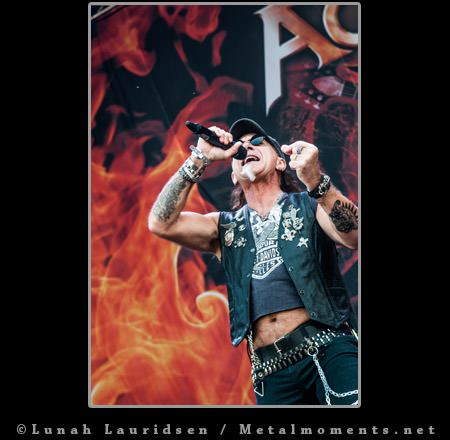 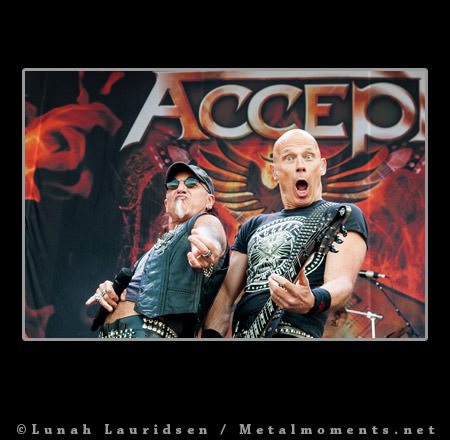 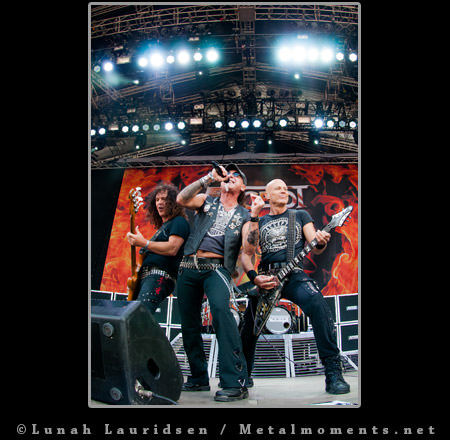 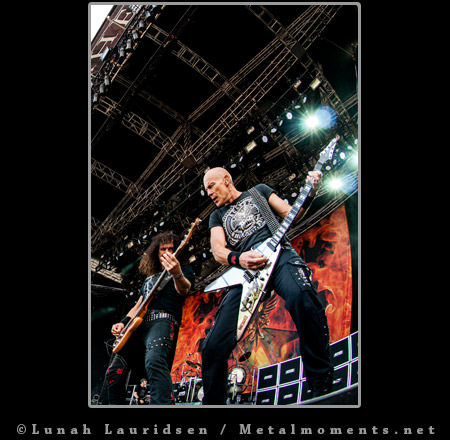 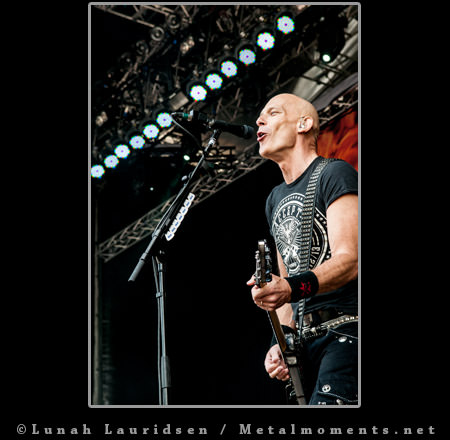 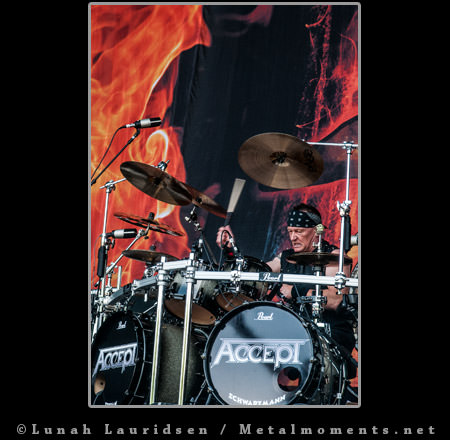 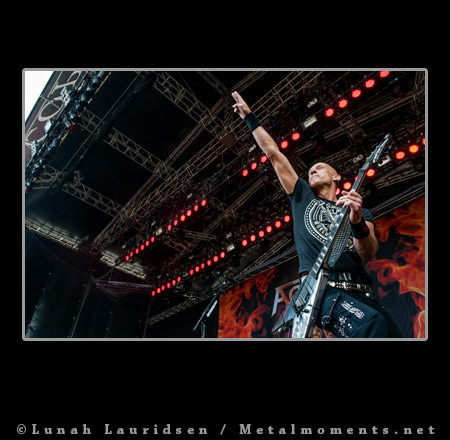 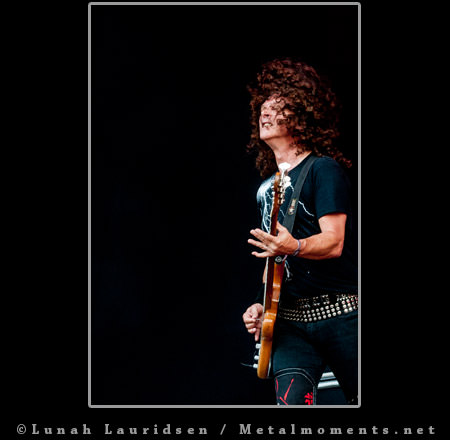 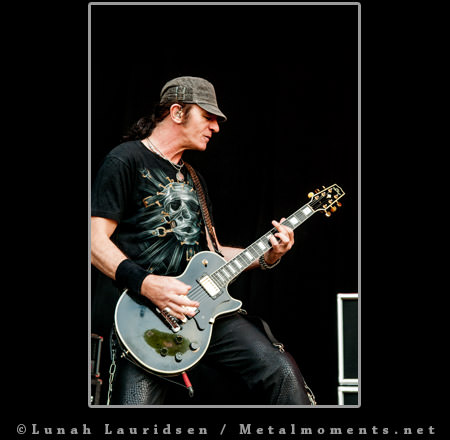 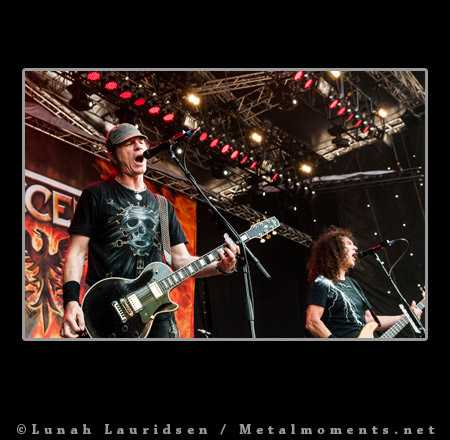 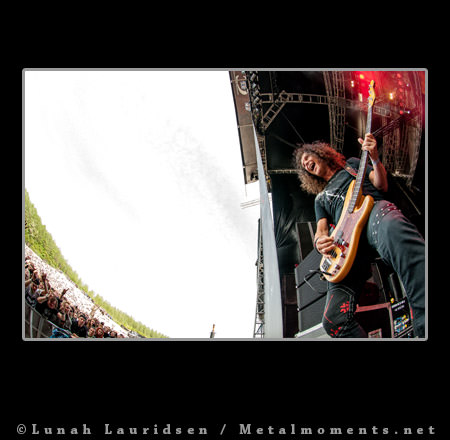 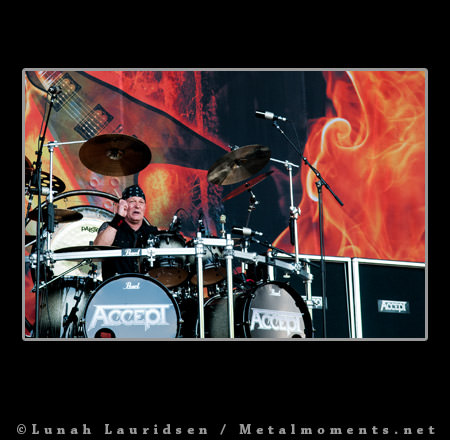 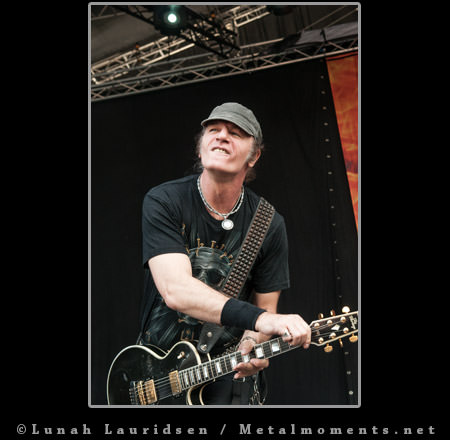 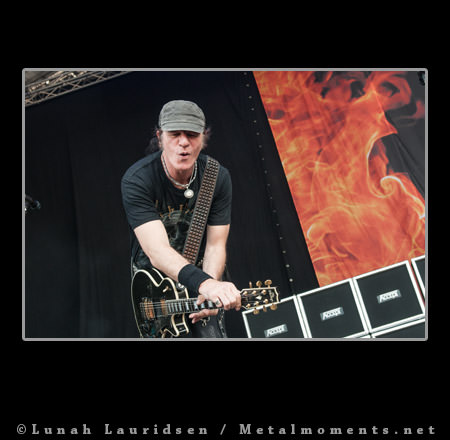 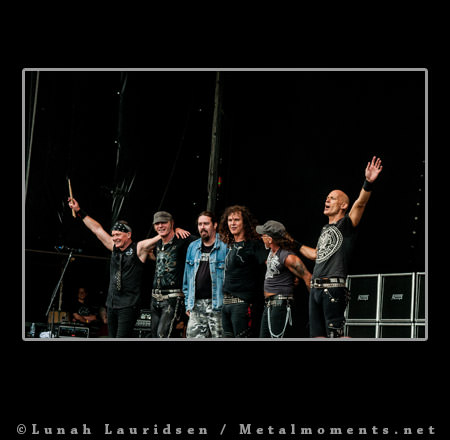 True to tradition, Copenhell let Helvíti, the large main stage, be opened by a classical metal act on the final day of the festival.
In yesteryears, we had seen Anvil and Saxon play there, and this year it was Germany’s Accept who had the honour.

Accept is a band I have known since early childhood, and even though they have produced a few tracks I really liked, they have never been a band I have immersed myself in, and this was in fact the first time ever I would see them live.
Many of the songs I remember from my childhood I have heard before, when Udo Dirkschneider has played them with his band U.D.O., but the iconic singer has long since left the band that started his career, and now it would be fun to hear the actual band that wrote them also perform them.
Except for the relatively new vocalist, Mark Tornillo, the band in this day and age consist of two originals, bassist Peter Baltes and guitarist Wolf Hoffmann, as well as guitarist Herman Frank and drummer Stefan Schwarzmann – all in all several old members and that single new one.
Just in case the crowd wasn’t up for it, Accept had chosen an intro which included the sound of cheering people just to get things off on the right foot, and the band immediately began playing Hung, Drawn And Quartered as they took the stage, and then quickly followed with Stalingrad.
With the latest album well out of the way, it was now time to let the old times rule, only shortly intersected by two songs from the 2010 album Blood Of The Nations – there was no doubt that these German gentlemen knew what the crowd wanted to hear!

Accept was so unmistakably German actually that it was almost silly had it not been for the fact that this was just what I was looking for in this band. What I was quite surprised to learn was that Tornillo actually is an American. His vocals sounded close enough to Dirkschneider’s to fill his shoes, and the German accent was even there as an atmosphere builder – why and how exactly he had acquired this I can’t say, but it fit the bill for this show like a hand and glove.
The music was also classic through and through, where the almighty riff was god and the rumbling of the rhythm section was an oncoming thunderstorm ready to blow us away. What could be better than playing air guitar to one of metal history’s most recognisable riffs, Balls TO The Wall? Not much I can tell you, but the sing-along to Ein Heller Und Ein Batzen introducing Fast As A Shark made a good stab at it!
The performance was a little bit more of a mixed bag of treats, where Tornillo was good at performing but I wouldn’t mind him saying something more memorable between songs. Hoffmann was the real eye-catcher of the show; he was all over the stage, constantly posing and had a great expression on him where the passion for the music shone through like a lighthouse on a clear winter night. Schwarzmann and Baltes were good, but didn’t leave a lasting impression, and Frank was very anonymous as he almost never approached the edge of the stage, or moved much at all for that matter. Frank did have some serious problems with his guitar in the beginning though, and since I haven’t seen anything else by the band to compare with, I can only hope that it was this that worked a bit like a stick in the wheel for him.

The crowd on the other hand...
They were not so much on the other hand, come to think of it, but were in fact a very mixed bag of treats as well. For starters, Accept had only managed to draw a mid-sized audience to their opening of the stage this day, where a very large number of people had opted to treat their heads right and just hang back on the hill opposite the stage.
There were of course some real party heads among us as well, and the standing crowd in front of the stage wasn’t small by any means! There was head-banging, air guitar play and sing along’s to the hearts’ content. Hoffmann’s classical jam in Metal Heart had a lot of people humming along, but this merely served as a warm up for the real power test during the two final hits which came shortly after. Even though he didn’t say too much, as I mentioned above, Tornillo proved to be a very capable frontman who had no problem in leading the audience into cheers, chants and even a wave of arms at one point.

I won’t deny that the crowd seemed to have a royal time in the company of Accept, and to be fair there isn’t one single point o the performance that I would have wanted much differently delivered, but for some reason this concert just didn’t grab me the way I had hoped it would, and in the end it ends like so many others filed under good but forgettable.

Hung, Drawn And Quartered
Stalingrad
Restless And Wild
Breaker
Princess Of The Dawn
Losers And Winners
Pandemic
Metal Heart
Teutonic Terror
Balls To The Wall
Fast As A Shark